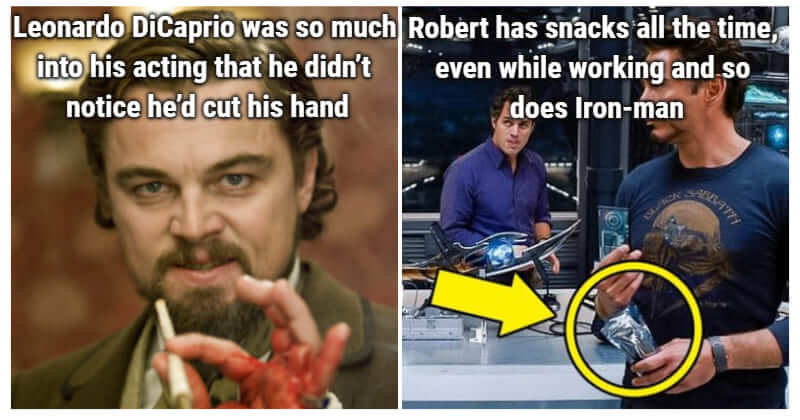 Making a movie is an art and all movie crew is artists. An Oscar-winning script, the most modern equipment, and even a large budget can’t ensure that the movie created will be loved and widely spread.

However, a movie can be memorable and attractive when there is something impressive about it! It’s because viewers don’t really care much about the amount of money you invest in making your movie, which equipment you use to create beautiful scenes. The most important thing is whether the film makes them satisfied. This is absolutely brought from touching moments, which requires the true feelings of actors.

A detailed script is inevitable in making a movie, but following it strictly sometimes is unnecessary. Many directors express that they openly encourage their actors to go off-script and freely stimulate their creativity. Therefore, the “mistakes” that the actors made when they ignore the script aren’t always bad, even they become iconic moments and make the movie better.

Here are some examples proving that movie mistakes make the movie memorable!

After incredible Steve Rogers’ transformation, Carter reached out to touch his chest, but this reaction wasn’t planned.”When Chris Evans first took his shirt off on the set of ‘Captain America,’ I just instinctively grabbed his man boob,” Atwell told Esquire in 2011. “They kept it in the film. So we did a couple of takes of me being really inappropriate with my hand on his pec for the duration of the scene.”

#2 Indiana Jones: Raiders of the Lost Ark — the fight Initially, it was planned to shoot a long fight scene with the bad guy in black, but that day Harrison Ford didn’t feel well. Steven Spielberg didn’t want to interrupt the shooting schedule and invited Ford to just shoot the enemy, which he did. A collective bout of laughter in the scene is unscripted, but Benicio Del Toro broke the wind several times during the shooting, that’s why Gabriel Byrne covered his nose with his hand to hide his laugh.

#4 The Dark Knight — the hospital explosion

A technical glitch happened and made a series of explosions stop unexpectedly. The reaction of Heath Ledger is an improvisation that saved the scene.

#5 Guardians of the Galaxy — the sphere scene

In “Guardians of the Galaxy,” Peter Quill (Pratt) presents a powerful orb to the Collector (Benicio del Toro) but nearly drops the precious item in the process. Director James Gunn wrote in a tweet that he thought the slipup was an accident.

But Pratt later replied director that that moment was a “hundred percent intentional” and that it’s better to “ask forgiveness than permission” when it comes to going off-script.

#6 The Lord of the Rings: The Fellowship of the Ring — knife throwing

The lightspeed reaction of Viggo Mortensen saved the scene. There should be a tragic accident when a knife that was aggressively thrown by the orc actor slipped and was heading directly for Viggo’s face. He managed to strike it aside with a sword so that it just broke into splinters. Leonardo DiCaprio was so much into his acting that he didn’t notice he’d cut his hand. Quentin Tarantino decided not to stop the shooting, and that’s why the scene appeared to be so fascinating.

#8 American Sniper — the scene with a baby

This scene was great with the improvision of Bradley Cooper. The real baby in the scene couldn’t join because of its health problem. That’s why he had to deal with a doll. To make the scene with the doll more realistic, he touched the doll’s hand and made it shake. Robert Downey is considered the best choice for Iron-Man that no one could replace him. He was so into the character that he brought the character his habit. Robert has snacks all the time, even while working and so does Iron-man. He gave blueberry to Hulk and Steve unintentionally in the scene. Daniel Craig fell into the water, but the shooting was not stopped. Instead of another hot chick in a bikini, the audience saw Agent 007 in swim briefs. This is more than just a decent substitution. Dustin Hoffman literally brought his characteristic to his character. When Hoffman was unexpectedly almost hit by a taxi, he started shouting at the driver, “I’m walking here! Get out of here!”

#12 The Princess Diaries — the fall

This falling wasn’t planned but it was kept because it was so appropriate to the clumsy princess Mia’s behavior.

Who Are Members Of The Addams Family? The Weirdest Family In Cinema

8 Iconic Movie Scenes That Were Only Made For Budget Reasons

​​7 Female Celebrities Who Look Much Younger Than Real Age