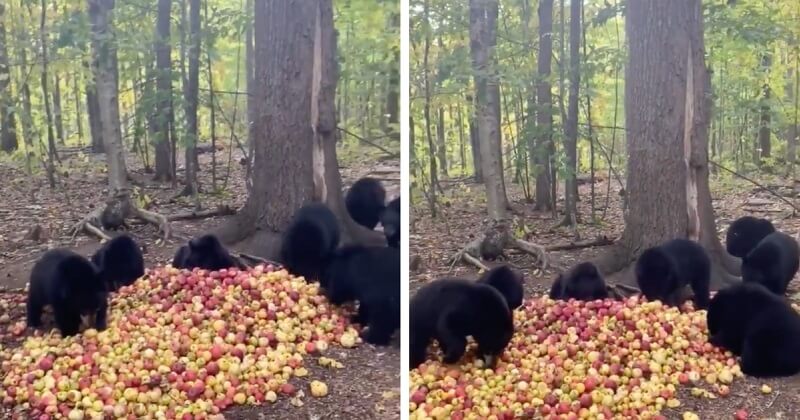 If you are having a bad day, the group of happy bear cubs in this post will make your day brighter. Warning! You might fall in love with them and their cuteness!

Bears are big fans of fruits, especially apples. So when the Kilham Bear Center decided to treat their bears with a pile of delicious apples, they videotaped the moment and were pleasantly surprised. The sound these rescued bear cubs make as they enjoy their tasty meal is just adorable. Even the takecarers were taken surprised as black bears rarely vocalize. The adorable scene was caught on camera by a writer, producer, and wildlife lover named John Fusco. He then shared it on Twitter, where it went viral and melted everyone’s heart. “Have you ever heard bear cubs make their ‘sound of contentment’?” he stated in the caption of the video.

Kilham Bear Center near Lyme, New Hampshire, is a sanctuary for orphaned black bears from New Hampshire, Vermont, and Massachusetts. Here, the cubs are cared for and rehabilitated until they are ready to return to the wild. Rae Wynn-Grant, a conservation biologist said upon the video: “They’re obviously in a healthy sanctuary … it kind of makes sense that they would be cooing and telling us how great they feel.”

You can watch the adorable moment in the video below!

Have you ever heard bear cubs make their ‘sound of contentment’? @RaeWynnGrant pic.twitter.com/CpuuM86imw

Please share this cute video with your friends and family members to make their day!

10+ Times Cats Said “If It Fits, I Sits” And Proved Themselves Right

Woman Expels Her Boyfriend After Hearing Him Speaking Ill Of Her Cat – Is It Worth It?

10 Cats Who Have Mastered The Art Of Taking A Nap