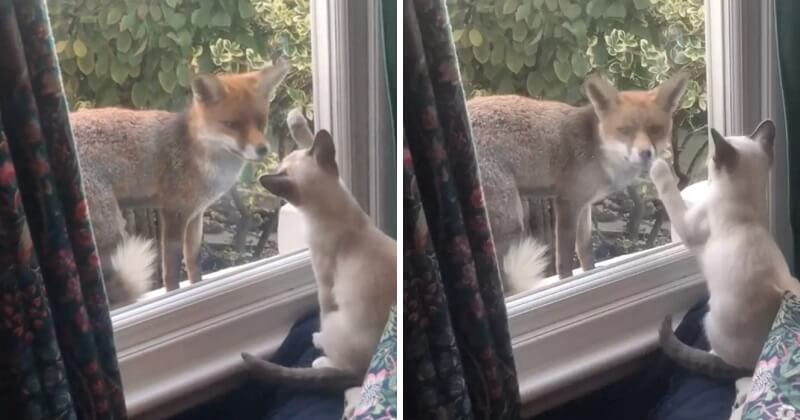 Many people love watching everything from their living room windows, and this is no exception to Jennifer Rutter. She loves watching the wildlife through the windows of her house in London. But since February, she has had a special guest who makes her life brighter and happier.

According to Rutter, a sweet little fox visits her garden daily to hang out and suns itself on her window ledge. “I see that fox nearly every day, and she’s a favorite on our street,” Rutter said. “The kids watch out for her from their bedroom windows.”

Rutter loves the wild fox as she is polite and gentle. She even brings Rutter so many gifts such as a bag of moldy limes, lots of chicken drumsticks, a single sausage, and a small toy car. Recently though, the fox made friends with Dodo, Rutter’s house kitten. Dodo was hanging out with her in their home when the fox appeared at the window. The brave little kitten immediately sprang at the opportunity to play with the wild fox. The patient fox watched as Dodo chirped to say hello while pawing at the window. Dodo was not frightened by the wild creature, even despite their vast disparity in size and look. She is friendly and loves to befriend almost everyone who passes by. “Dodo was on my knee, and I pointed the fox out to her,” Rutter said. “She jumped up to the window and caught the fox’s attention, and then I started to film. I’ve never seen them interact before, and it was so moving to see them mirroring each other.”

Here’s the touching moment on video:

“I thought the fox seemed curious and playful — not a threat,” Rutter said. “It was like Dodo had interrupted her, and she was graciously giving the baby cat some attention.”

Rutter and Dodo love visits from the fox and can’t wait to see what gifts she brings them.

Incredible Photos Of A Black Panther In Africa For The First Time In 100 Years, Captured From Camera Traps