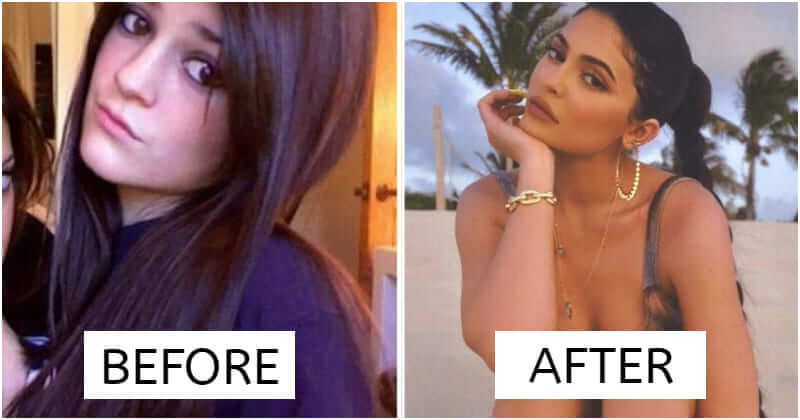 The road to success in life is not a bed of roses. It’s fiercer in the entertainment industry. To make a name for themselves, celebrities have worked hard to advance their skills and improve their appearance. They pay more attention to makeup, hairstyle, and outfits every time they appear in front of the crowd, especially on the red carpet. Many go to the gym to improve their physical strength and keep in good shape. It’s a good thing as our celebrities love themselves more, then, care for their fans more.

And, it’s understandable that many celebrities looked completely different before and after being famous. They all become a better version of themselves over the years in terms of their career and appearance. Today, we are excited to introduce 23 celebrities who changed dramatically after they become world stars. Khloé Kardashian, Ariana Grande, Kylie Jenner, and Chris Pratt are all on the list. If you are fans of these names, keep scrolling and enjoy. Who would Kylie even be without her lip fillers? Nicole looks so different now. Noone could believe that baby face once belonged to Nicole Kidman Do you remember the portraits of Ariana Grande in “Victorious” and “Sam and Cat”. Baby-faced Ariana turns into a gorgeous lady now. I fall in love with curly red hair and the sweet smile of Chris Pratt when he starts out. Heidi famously had extensive plastic surgery that she documented on The Hills. That is why she looks completely different. A gentleman with a charming smile. Ryan Seacrest has won the hearts of millions of fans. Cardi started out from Reality TV and Cardi looked really different from now. We’re all familiar with the look of Nicole Richie now: chic and sophisticated! But she was once a victim of 2000s fashion. It can be said that Khloé made an incredible transformation, from her hair to appearance. She looks perfect now! Well, Eminem hasn’t always been so tough and serious. Just look at his teenage photo. Bella Thorne started out on the Disney channel. And now, she is a punk-like artist, splitting time between acting, singing in a band, directing, and even YouTube. Kim Kardashian is sexier and wealthier now. Plus, her hairline changed, too. Kendall Jenner was once an awkward teen with braces. But now she is a gorgeous supermodel. Hailey Bieber is a model and the face of Levi Jeans. Taylor’s look has changed a lot since her teen. She’s settled into a more traditional style with a red lip. A classic thing. Drake didn’t start out with music. He first starred on the Canadian show Degrassi, but then he pursued a career in music. This handsome DJ really grew into his looks! From a star of “Suits” to a member of the royal family, Meghan Markle has changed a lot. Cara’s facial features are still unchanged: iconic eyebrows and cheekbones, which help her a lot with her modeling and acting careers. Ivanka Trump is successful and beautiful now. But she was once a teenager with braces. Pamela Anderson was just a sweet, normal-looking girl with a totally-in-style-for-the-times mullet before she was famous.