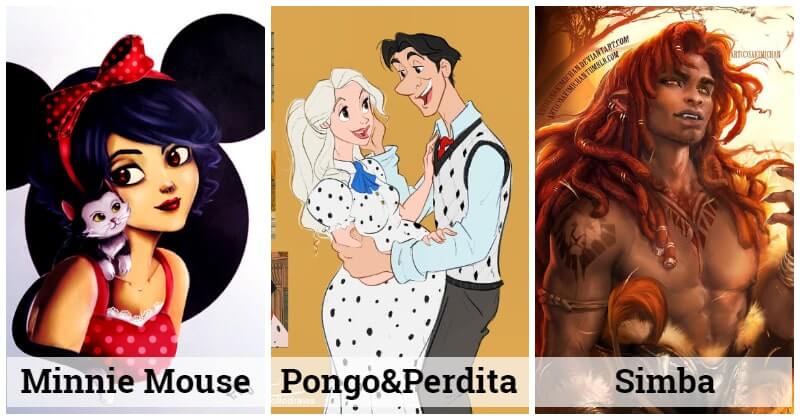 It’s not an exaggeration to say that cartoons have been a beloved part of our childhood. And you can realize that in the animation world, the boundary between animals and humans nearly disappears because even animals can interact and show emotions like humans. In movies, you can see talking bears or bunnies, which is entirely normal. However, have you ever thought of what your favorite cartoon characters would look like if they turned into humans?

That’s exactly what these artists have accomplished! Famous animals, monsters, and creatures in cartoons have been transformed into ridiculously awesome-looking people! For example, our lion king Simba is “humanized” as a really charming and wild man. Or Minions are reimagined as lovely blonde guys.

We have found some of the most well-known cartoon characters who have been reimagined as people. They’re really great and show off amazing creativity. Take a look at the collection and tell us your favorite art!

#1 Minnie Mouse is a pretty girl #2 Minions are so cute #4 Miss Bianca And Bernhard are so chic #5 This is perfect. I also love that Perdita is pregnant. #8 Some incredible pictures of Spongebob

#9 Simba is looking way too handsome for his original character. #10 I am having mixed feelings about this handsome Scar. #11 We have Dodger and Rita with Oliver, they look like a family. #12 This art style is creative #15 We have some handsome men from “The Lion King”.

#16 All the characters from “Winnie The Pooh” but no honey. #18 Some of the Disney horses as humans

#19 Dory is looking great with that dumbstruck look. #20 I have to say that anime Eve looks adorable #21 Basically, there is no difference in Louis. #22 Lady and the Tramp have such adorable expressions #24 Duchess and Thomas are happy #25 The expressions of Judy and Nick are spot-on!