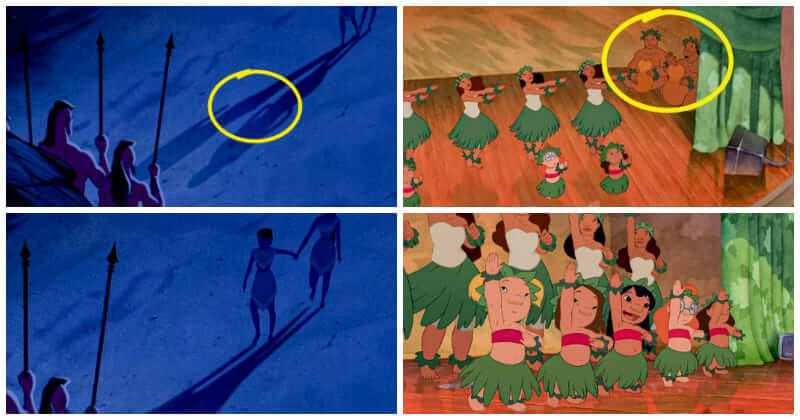 It’s not easy to produce animated movies. It requires years to complete, followed by the meticulous work of thousands of people. Even when the directors, producers, and animators pay great attention to every detail, small and big, the movies may still have mistakes. The point is that they didn’t notice them until the movies are released on the big screens. Eagled-eyed fans do their work. They focus on the scenes, and of course, pick up these mistakes in one go.

In this post, we’ve summed up 15 mistakes in 15 famous animated movies that were overlooked by the directors and producers. You might have watched these movies but didn’t notice them. I did, too. I had no idea that these mistakes exist although I’m a big fan of animated movies. So, let’s scroll down and check them out!

1. Cinderella’s sleeves disappeared in the end. Do you remember the scene Cinderella bidding farewell to everyone at the end of the movie? She was wearing a full sleeves gown then. But in the next scene, our princess was seen wearing half sleeves. In a scene in Toy Story, Andy went out to buy Pizza and he left Buzz and Woody on his desk. There was nothing around both the characters. In the next scene, however, a Magic 8 ball appeared next to Woody.

3. In “Toy Story”, Buzz Lightyear kept acting like toys when he was around other toys. The point is he claimed not to be a toy. 4. In “Lilo & Stitch”, two musicians disappeared from the dance class. 5. In Another scene of the dance class (“Lilo & Stitch”), the musicians played different instruments. In one scene in “Tangled”, Flynn got shackles. But in the next scene, they disappeared.

7. It’s strange that Boo in “Monsters Inc” only reacted to electricity in some scenes. 8. Vanellope got her tooth back for the rest of the movie. In “Wreck-it Ralph”, Vanellope lost a tooth in an accident but a new one came out for the rest of the movie.

9. In one scene from “Frozen”, Olaf was the first to be thrown from the cliff by the ice monster. But in the next scene, OIaf was seen falling after Kristoff. 10. In “Beauty and the Beast”, the spots on the Beast’s face kept coming and going. Source: © Beauty and the Beast / Walt Disney Pictures and co-producers

11. In another scene from “Beauty and the Beast”, the scratches on the Beast’s portrait changed direction. Source: © Beauty and the Beast / Walt Disney Pictures and co-producers

12. In a scene from “Pocahontas”, where leading character joins Nakoma to visit John. They were holding each other’s hands but their shadows didn’t touch hands. 13. The fork that Ariel from “The Little Mermaid found in a sunken ship had four prongs. But in the next scene, it is seen having three prongs. 14. In a scene from “The Hunchback of Notre Dame”, you can spot Bella reading a book on the streets. 15. In a scene from “Toy Story”, when the TV was turned off, a reflection of Hamm and Rex disappeared.