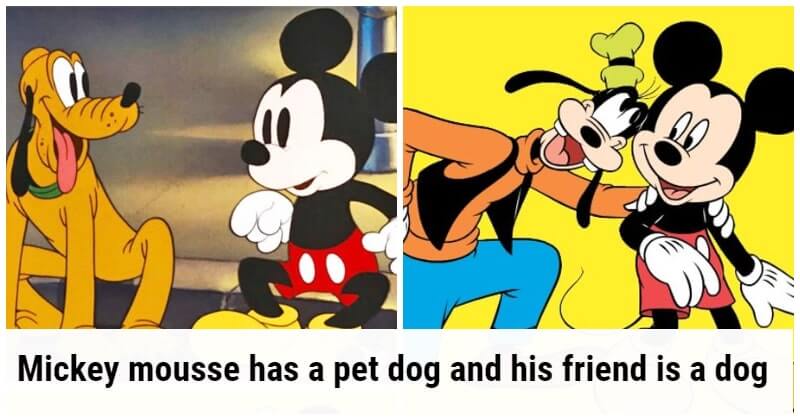 We have to admit it, almost animations are illogical but adults, as well as children, love to watch them. From Disney’s “Mickey Mouse” to later animated movies like “SpongeBob”, “Tom and Jerry”, “Phineas and Ferb”,…we are all enamored with the amusing plot, the lovable characters, and the joyful melody. But are we so enthralled that we skip the rather illogical details in the film?

Of course, in animated films, the same logic as in real life is difficult to achieve, but there is still numerous nonsense that causes the spectator to be surprised and perplexed. Try to look at cartoons through the lens of science and logic to see how ludicrous they are. Here are a few of the most ridiculous scenes in the movies you undoubtedly missed.

#1 How did he wear that shirt…without tearing it with his sharp pointy nose? #2 Why the prince can not recall the face of a girl he fell in love with? #4 Mickey Mouse has a pet dog and his best friend Goofy is also a dog. LOL #5 They can not escape that cage, right? #6 A crab has a daughter as a whale. Sounds funny, right?

#7 In Disney logic a half-human, half-fish can have nipples and a real human can not…

#8 Why can he listen to music with his eyes? #10 In this story, there is literally not even one person in the whole kingdom that had the same shoe size as Cinderella. #11 Why didn’t his eyeglasses fall off? #12 These are two characters who only wear pants when they go to the beach.

#13 SpongeBob clearly never took a physics class. He is blowing through an aqualung!! #16 The Flinstones probably predicted the future because they were celebrating Christmas way before Jesus was actually born. #17 Squidward watering the flowers underwater. Wow, man, it is so weird. #18 Wait, what?! I thought those were supposed to be their hair, right? #19 Who is going to tell him that he will die if he jumped? #20 Just wear a tiny mask and change your clothes before you leave for the party, I am pretty sure no one will recognize you.