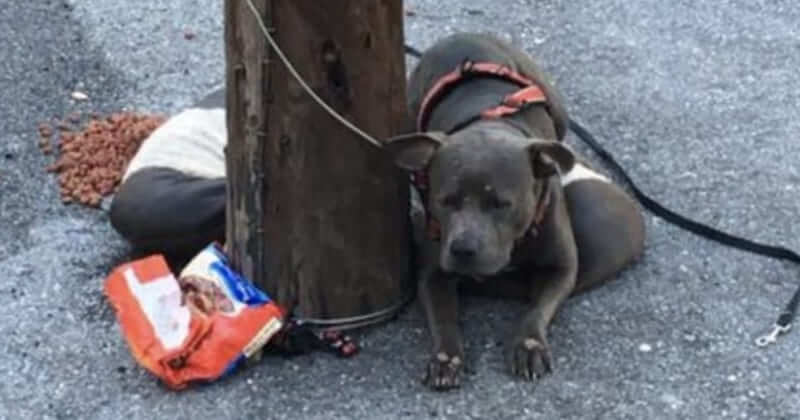 There are thousands of abandoned dogs in America every year. Some of them are left in a shelter. But many are dropped in a way that couldn’t be more ruthless, and they looked so broken. We can only pray that they would find a new home soon and wouldn’t be dumped in the street anymore.

Ranger (the dog in this story) was abandoned in a parking lot behind a cat shelter. He was tied to a telephone pole with a bag of food, a bowl of water, and his bed. His owner didn’t want him anymore. The poor animal looked desperate and hopeless. Marge Morris, the director of Project Purr Animal Rescue, spotted the poor dog. She was surprised because her shelter usually houses cats and kittens. It was strange if she brought this dog inside. Marge took a photo of Ranger and posted it on their social media page. She then drove him to the local shelter. Luckily, her post quickly went viral, a hearted-kind woman, Ginny Leclair, offered to adopt Ranger. Ginny picked Ranger up from the shelter. She took him to the vet where he was neutered and vaccinated. However, she realized that Ranger seemed to exhibit some aggression toward other dogs. His behavior probably began from his trauma of being abandoned. The kind-hearted woman decided to help him control his temper and understand that she is in charge of him, from now on. With her love and patience, Range improved his behavior dramatically. Now, he is a truly beloved dog living happily with his loving foster mom. He has healed all the pains that he went through.