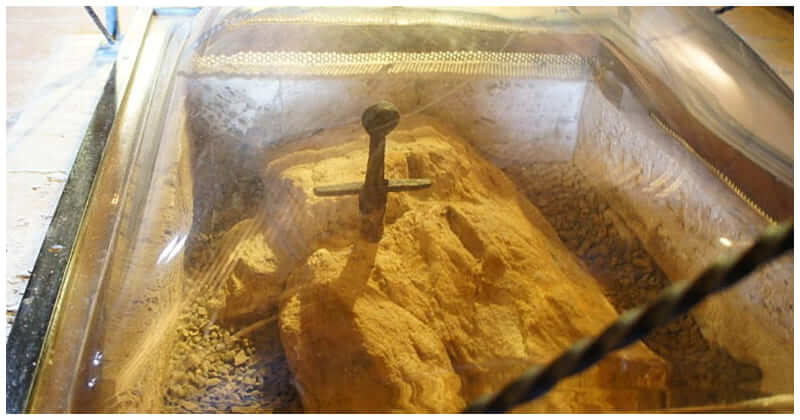 Recently, experts have authenticated the sword of St. Galgano, claimed to have been plunged into a stone by a medieval Tuscan knight, which further strengthens the Italian version of the legendary Excalibur. According to tradition, Galgano Guidotti, a noble from Chiusdano, near Siena, allegedly split the stone with his sword in 1180 after renouncing war to become an ascetic. The sword was doubted to have been forgery for hundreds of years, but recent research has stated that its metal dates back to the 12th century.

Galgano Guidotti, a noble from Chiusdano, near Siena, allegedly split the stone with his sword in 1180 after renouncing war to become a hermit. For centuries the sword was assumed to be a fake. but research revealed last week has dated its metal to the twelfth century.

Only the hilt, wooden grip and a few inches of the 3ft blade poke from the hill, still attracting pilgrims and tourists to the ruins of the chapel constructed around it. ‘Dating metal is a very difficult task, but we can say that the composition of the metal and the style are compatible with the era of the legend,’ said Luigi Garlaschelli, of the University of Pavia. ‘We have succeeded in refuting those who maintain that it is a recent fake.’

Scientists carried out a ground-penetrating radar examination, indicating that there is a cavity beneath the sword, believed to be a burial recess, probably carrying the remains of the knight. Garlaschelli said: ‘To know more we have to excavate.’

Experts also revealed that 2 mummified hands in the same chapel at Montesiepi were from the 12th century as well, using carbon dating. The sword also appeared in myths, in which anyone unworthy trying to pull the sword out would have their arms ripped off. In the legendary tale of King Arthur, Excalibur is pulled out from the rock by the future King, heralding his glory; while in Galgano’s case, the miracle indicated humility and holiness.

Galgano had been infamous for his arrogance and selfishness due to having a background as the son of an illiterate feudal lord. Galgano retreated to a cave to become an ascetic, after having a vision of the Archangel Micheal in his dreams.

Then, Galgano was lured out by his family, and was thrown off his horse while passing Montesiepi, a hill near Chiusdano, where another vision told him to renounce material things.

Galgano objected that that would be as difficult as splitting a rock and to prove his point he struck one with his sword. The rock, it is said, yielded like butter.