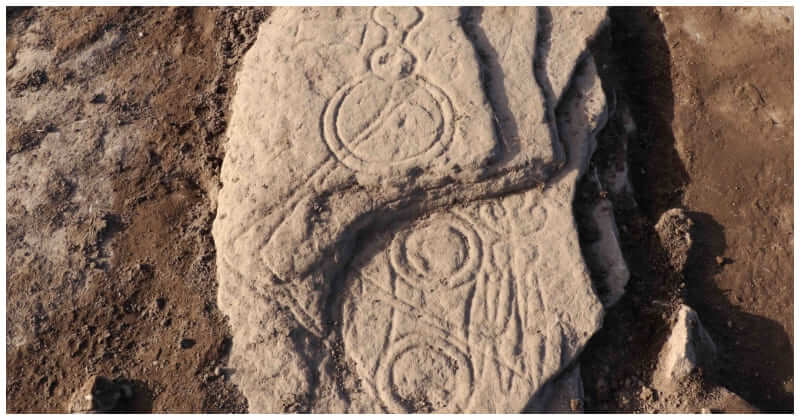 A stone inscribed with Pictish symbols has been discovered in a farmland near Forfar, Scotland, according to a team of archaeologists from the University of Aberdeen. They came across the oddities that led them to the 1.7-meter-long stone during their geophysical examinations on the landscape of the Aberlemno stones, a series of 5 Class I and II Early Medieval standing stones discovered near the village of Aberlemno. Being part of the Leverhulme Trust funded Comparative Kingship project, the research requires the team to excavate a tiny hole to test and denote if the irregularities were partially components of a construction or settlement. The paving consisted of the Pictish stone and instances of Bronze Age petroglyphs that seems to be established directly on top of settlement layers extending back to the Pictish era.

Professor Gordon Noble, the project leader, revealed: “There are only around 200 of these monuments known. They are occasionally dug up by farmers ploughing fields or during the course of road building, but by the time we get to analyse them much of what surrounds them has already been disturbed. “ “The benefits of making a find in this way means that we can do much more detailed work in regard to the context. We can examine and date the layers underneath it and extract much more detailed information without losing vital evidence,” he continued

“The discovery of this new Pictish symbol stone and evidence that this site was occupied over such a long period will offer new insights into this significant period in the history of Scotland as well as helping us to better understand how and why this part of Angus became a key Pictish landscape and latterly an integral part of the kingdoms of Alba and Scotland,” added Noble.

H/T: The University of Aberdeen