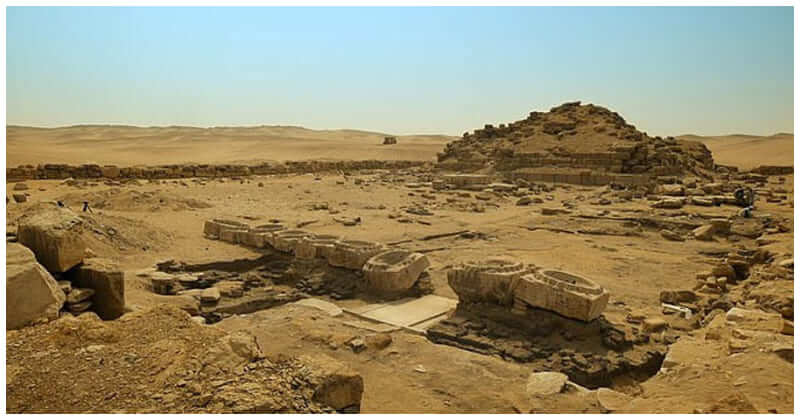 Archaeologists were completely taken aback when they recently unearthed the remnants of what is thought to have been one of the six sun temples constructed by the pharaohs of the Dynasty V from the Old Kingdom of Egypt.

The site, known among the most important ones in terms of archaeological value for several decades, is located in Abu Gorab, south of Cairo and north of the archaeology site of Abusir. The most recent finding add up 1 sun temple to the 2 already discovered, making it three, meaning scientists have already located 3 out of the 6 sun temples, and it has been at least half a century between the discovery of the 2nd and 3rd sun temple, stunning archaeologists.

Dr Massimiliano Nuzzolo, assistant professor of Egyptology at the Academy of Sciences in Warsaw, said: “We knew that there was something below the stone temple of Nyuserre. The fact that there is such a huge entrance would point to a new building. So, why not another sun temple, one of the missing sun temples?” The Fifth Dynasty: Constructors of the Ra Sun Temples

Acient Egypt’s sun temples were built to show the faithfulness and devotion towards Ra, the ancient Egyptian sun god, also hailed as the creator god of the Egyptian pantheon, meant to confer god status on the pharaohs constructing them, granting the pharaoh god status during their lives.

Meanwhile, Egyptian built pyramids with the purpose of providing pharaoh a final resting places, guaranteeing their rebirth into divine beings in their nirvana. Recorded documents speak of 6-7 distinct sun temples erected by 6 pharaohs of Dynasty V, including Userkaf, Sahure, Neferirkare, Reneferef or Neferefre, Nyuserre, and Menkauhor and the practice were discontinued by the 8th, Djedkare Isesi.

The remains of the first two temples found are from the one built by pharaoh Userkaf in Abusir and by pharaoh Nyuserre Ini of the same dynasty in Abu Gorab, respectively.

The Older Temple at Abu Gorab

The 3rd sun temple discovered to date is located right under the surface of the temple of Nyuserre, reigning nearly 30 years in the late 25th century BC, making the latest finding at Abu Gorab intriguing. An older base formed from mud bricks, signifying the presence of another construction at the location 5 decades ago had been spotted by archaeologists excavating the Nyuserre temple, who later found the 2-foot-deep (61-cm-deep) base of a white limestone pillar, indicating that the primary structure was quite remarkable.

Nonetheless, it costed scientist 5 more decades to discover more proof, notably an array of beer jars full of mud, which clearly suggests that this was part of a totally different and older temple compared to the temple on the surface.

Dr Nuzzolo stated, “I have now many proofs that what we are excavating here is one of the lost sun temples.” The reason why the beer jars filled with mud can confirm the location of the 3rd sun temple from the Fifth Dynasty is that, they were valuable religious offerings made by ancient Egyptians at their most sacred sites, not to mention the discovery of architectural ruins as well. Constructed following to the same pattern, the sun temples all had a huge courtyard with a pillar or obelisk aligning with the east-west axis of the sun, and a separate entrance and exist, all constructed on the west bank of the Nile River, similar to the erection of pyramids.

Despite the fact that most of them are mostly destroyed, scientists revealed that they were open-air worship sites, instead of closed ones, based on the trace of their remains. This latest discovery confirms that this ancient civilization, a focus of archaeological study and funding for more than a century, hasn’t yielded all its secrets and that many sensational discoveries still remain hidden.

You can check out this VIDEO below and form your own opinion:

How To Defeat La Signora? The Simplest Guidance