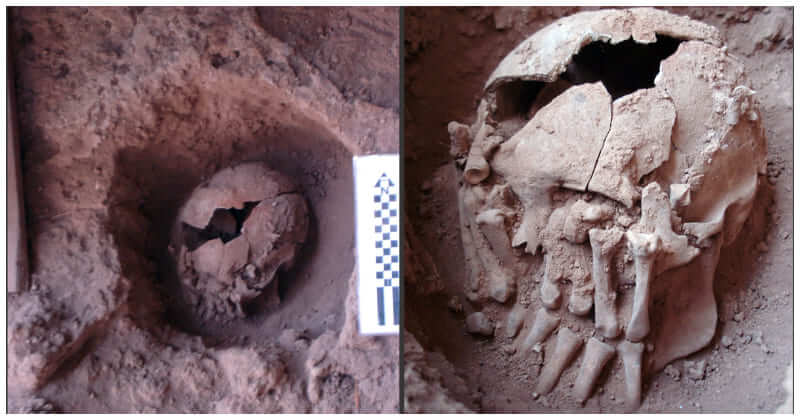 Recently, a human skull has been reported to be found in a Brazilian cave, possibly the oldest proof of ritual beheading discovered in the western hemisphere, according to scientific reports. Previously, during an excavation in a limestone cave north of the central Brazilian municipality of Belo Horizonte, scientists were able to unearth a 9,000-year-old skull only 2 ft. beneath the surface under limestone slabs.

Named Lapa do Santo, the place has long been famous for human inhabitants from 12,000 years ago, although the skull could be the oldest-known instance of a burial ritual focusing on the practice of head decapitation performed on the dead in the Americas.

While the evidence of skull worship and beheading for award purposes, the oldest decapitated remnants previously reported were about 3,000 years old.

However, the new discovery pushes that back by about 6,000 years and seems to have been a reflection of the deceased’s beliefs about death., and could also alter the common conception of South American beheading rites. “In the apparent absence of wealth goods or elaborated architecture, Lapa do Santo’s inhabitants seemed to use the human body to express their cosmological principles regarding death,” expert André Strauss said.

Upon its discovery, the skull had markings on the vertebrae, proof that it was lopped off after its owner’s death. Scientists believe that it was possibly from a young male who was part of the society when they found two severed hands laid over his face in a ritual pose.

Archaeologists also think that this might have been the most sophisticated grave to have been discovered up to now, considering all the skeletal remnants excavated at the Lapa do Santo site. “This ritualized decapitation attests to the early sophistication of mortuary rituals among hunter-gatherers in the Americas,” said Strauss.

“Geographically, it expands the known range of decapitation in more than 2,000 kilometers (about 1,240 miles), showing that during the early Holocene, this was not a phenomenon restricted to the western part of the continent as previously assumed.” Experts are also skeptical if this kind of ritual was a common one or it was an extraordinary one performed on this man, as these are the only skeletal remnants discovered at the place.

It’s also important to note that Lapa do Santo isn’t only famous for the beheaded skull, as it has been well known for a while as the location of the oldest petroglyphs found in South America, holding inscriptions illustrating males with giant penises, together with pregnant females.

However, the decapitated skull isn’t the only find that put Lapa do Santo on the map: the site is also the location of the oldest petroglyphs found in South America, which included carvings depicting men with enormous phalluses as well as pregnant women.