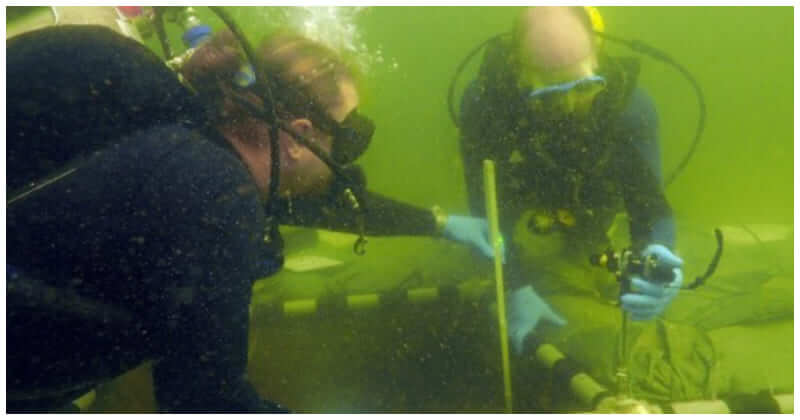 A 7,000-year-old burial site in the Gulf of Mexico has recently been found, after a hint from a recreational diver who previously discovered skeletal remnants there, back in 2016.

The site, dubbed “Manasota Key Offshore”, is seemingly conserved in what was back then a freshwater peat pond, and is located off of Sarasota County, Southwest Florida.

This finding is indicated as ‘unprecedented’, though there have been other locations that predate this one by thousands of years. “Despite thousands and thousands of years of hurricanes, storms, erosion and rising sea level, the continental shelf can contain deposits with organic material,” said Ryan Duggins, expert from the Florida Division of Historic Resources. “I think that’s going be the ripple effect.”

Duggins said that due to the Gulf of Mexico’s sandy bottom, and as sand doesn’t allow organic material to persist for long, he and other researchers have always believed that there would not be any conserved sites down here. However, this site is constituted mostly of peat soils.

“I was always kind of told that a site like this wouldn’t exist in the Gulf of Mexico, that it wouldn’t be able to survive,” Duggins said. “Just out of sheer luck, a citizen brought this information to our attention and it’s been a great experience.”

After the discovery, the site, located 300 yards off Manasota Key, has been patrolled by law enforcement officers, together with volunteers, to ensure that no divers would come too close to it. Previously, in 2016, human skeletons were spotted at the site by a recreational diver, leading to Duggins and his team began diving and researching the site not long after. It is so well-preserved that even wooden stakes discovered there appear to have been only buried recently.

“It looks like it was almost put there yesterday,” Duggins said. “We’ve recovered sticks that are sharpened on the end, they have marks on them and you can see charring, and normally wood is the first thing that goes. It disintegrates.”

So far, the oldest site to have been found is in the Big Bend area, dating back 14,500 years. Meanwhile, the Manasota site is about three-quarters of an acre in size and was located along the shoreline.

After conducting carbon dating analysis, researchers were able to determine the age of the carved stakes, around 7,214 years ago. At the time, sea levels were much lower, and the peat-bottom pond allowed the exceptional preservation of the remnants at the site. From time to time, despite the fact the the sea levels kept rising, the peat stayed in place, helping to preserve the relics and skeletons. Currently, the extracted relics are being preserved by experts from Florida Gulf Coast University.

“In all of the work that I do, I never lose track of the fact that I am handling materials that are of special importance to families and groups, especially those of the Miccosukee and Seminole tribes of Florida,” said Heather Walsh-Haney, an FGCU forensics professor.

Local authorities have decided not to reveal the exact location of the site to the public, in order to preserve its sensitive nature. Specifically, it is under protection by Florida law, in which any attempts to disturb the site or remove anything from it is considered against the law. “As important as the site is archaeologically, it is crucial that the site and the people buried there are treated with the utmost sensitivity and respect,” said Timothy Parsons, director of the state’s division of historic resources. “The people buried at the site are the ancestors of America’s living indigenous people. Sites like this have cultural and religious significance in the present day.”

Lastly, Ryan Duggins stated that he wants to survey around the areas surrounding Venice and off Charlotte County to find out whether the burial site at Manasota is part of a larger ancient community able to provide more evidence of life 7 millennia ago.

“I’m very confident that Florida’s continental shelf holds a lot more archaeological material that can be found,” Duggins said. “I would definitely like to have a more concerted effort around Sarasota and Venice.”

Tiktok Data Privacy Settlement Venmo: Is It Scam Or Legit?