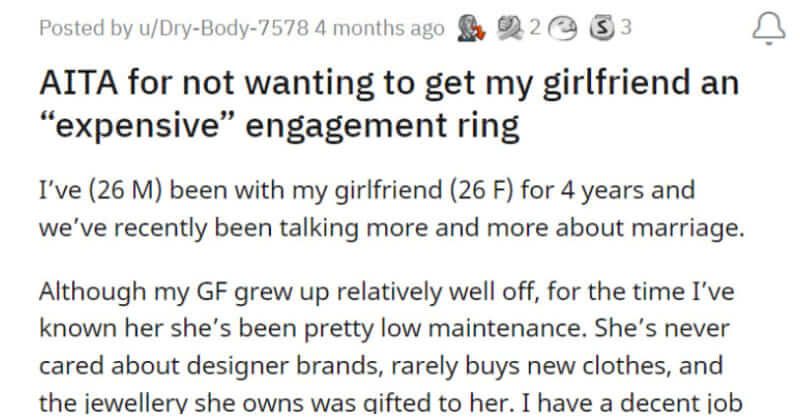 The one good ending of any love affair is a marriage. And for women, who would not want to receive a diamond ring from their men? That one ring holds so many meanings. It’s love, commitment, promises, and more. And, when it’s one piece of jewelry that you’ll wear on your hand for quite some time, will you go for the cheap? Of course, it’s up to each person’s financial ability to choose a suitable ring, but this issue is not for one person only. People getting married should sit down and talk about this together.

The guy in the story below was getting married. And while his girlfriend was excited to get an expensive diamond ring, this guy had a different idea. He thought spending 6k+ on an engagement ring was too much, and he wanted to make it around 2k. His girlfriend didn’t have a particular like on anything expensive, except that ring. And in his case, he was able to afford the ring she wanted, just thought it was not reasonable. So, they had arguments about this, and she finally gave up, saying that he could choose any ring he wanted. So, is he a jerk for doing that? Let’s scroll down to read the full story below.

#1 This guy asked people on Reddit about his action #2 So, he found out some diamond-like rings that were much more affordable to him, while his GF wanted a real diamond ring #3 That one line really pushed things too far, no one is worth 10k? Now, who’s being ridiculous?

#4 He also asked her sister and yeah, she was on his GF’s side

#5 The woman who has been with you in the dark days, doesn’t that make things more obvious? #6 Yes, even she doesn’t talk about that much. But do you think it’s a reason for you to overlook her actions?

#7 And here’s what people thought about his action #9 OP seemed like he was going for the least, a cheap wedding #10 The ring will still be there, it’s not lost. It’s not a single-use ring that can be toss in the trash after the wedding day #11 Considering the GF only wanted a fancy ring, that’s not something hard to understand 15 Best Pictures On “Accidental Surrealism” We Have Gathered So Far

30 Mildly Interesting And Funny Photos That Might Entertain You

Marriage Is Never Boring With These Humorous Partners

Every Year This One-Legged Guy Amazes Us With His Halloween Costume, And This Year Is No Exception

25 Brazilian DIY Projects That Are Both Chaotic And Ingenious

Top 8 Funny Advertisements Of All Time For Ideas Inspiration