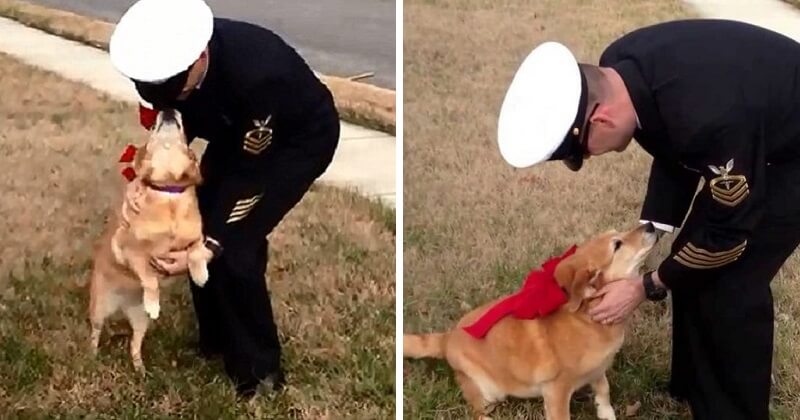 Eric Ralston is a principal sanitarium corpsman in the US Navy. In March of 2012, he left for a scheduled 9-month deployment. A month after he was stationed, his dog Kermie, an 11- time-old Lab-Beagle-Chow Chow, was diagnosed with oral carcinoma. Doctors believed that she’d at most two or three months left to live. “ We were devastated to say the least,” Jennifer Ralston, Eric’s wife, said. “Kermie was our first child, and we didn’t suppose Eric would ever get to see her again.”

However, Kermie was not ready to go until she saw Eric again and said farewell to him. Despite having a short time left to live, she tried her best to fight cancer and wait for her dad to return home from his deployment. It had been three months since Eric deployed, his brave dog still fought with cancer to wait for him. Seeing her effort, the family determined to help her see Eric one last time. As Eric’s employment came to an end, the family began to hope that Kermie would get to see him again.

12 days before Eric was due home, his deployment was extended indefinitely. Ralston feared Kermie wouldn’t make it until Christmas when Eric would finally come home. However, Kermie continued to try. A few days before Christmas, Eric returned home and Kermie was there to welcome him. She was caught on video sprinting from the house and into Eric’s arms. She couldn’t hide her happiness to see Eric. Eric’s return brought happiness into Kermie’s life before she passed away and had a new life in heaven.

“ His return was some kind of magic lozenge for her,” said Jennifer. “ She began eating and drinking again, without struggle.” Kermie soon was celebrating her 12th birthday in January, but by February she made a turn for the worse. “ When good days came good hours we knew it was time,” said Jennifer.

On February 22nd Kermie lost her battle with cancer. She passed away peacefully in the comfort of her home and the love of her family. She will be forever loved and missed by her family. Kermie the Dog – January 28, 2001 – February 22, 2013.

What a touching story! Please share it with your friends and family members!

20 Hilarious Photos Where Pets Look Like Their Owners So Much

Pregnant Sister Gets Kicked Out Of OP’s House After Trying To Abandon Her Dog, Gets Protected By OP’s Family

Man Picked Dog Up From Groomer But Realized He Had Picked The Wrong Dog!

10 Pictures Showing That, No Matter What, Cats Will Always Be Cats