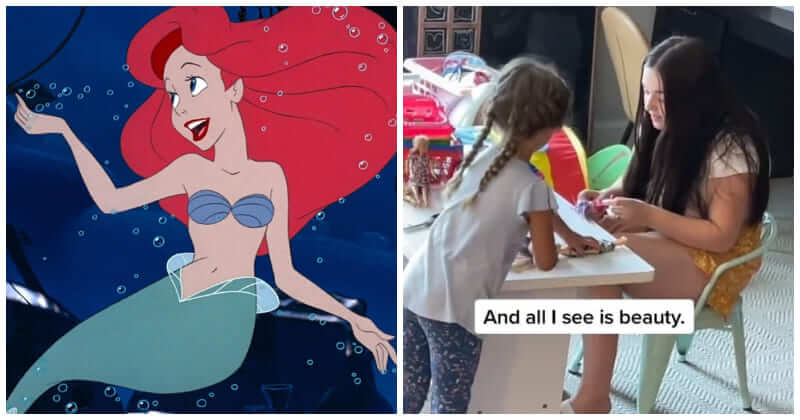 Disney princesses seem to possess everything that a girl dreams of. Gorgeous look, kindness, courage, smartness, and beautiful voice. It’s true to say that they are the role models of millions of baby girls over the world. Interestingly, there are real-life girls that have the beauty and talent of a Disney princess. The singing teenage babysitter in this post is a great proof. Teen Babysitter Becomes A Viral Sensation With Her Disney Princess Voice.

18-year-old Delaney is enjoying her work as a babysitter for an adorable girl. This enables her to be herself and live her childhood days again. She was born with an amazing voice but she seems not to be so confident to put out her voice. Luckily, Delaney meets Nicki, the mother who hired her and made up a turning point in her life. Nicki secretly filmed Delaney singing Ariel’s “Part of Your World” song from “The Little Mermaid,”. And, this video has just launched the singing career of the teen babysitter. As you can see, Delaney and Nicki’s daughter were aware of the video being captured. They were playing dolls while Delaney was beautifully performing Ariel’s famous song, hitting all the notes and capturing the mermaid’s longing perfectly. Nicki likely had no idea the video would go viral when she posted it on her Tik Tok page. She wrote over the video: “I am trying to encourage her to put her voice out there more. But she gets discouraged about the way she looks in her videos. And all I see is beauty. So do my kids. Let’s show her some love so I can get her to sing for us more!!!”

Amazingly, Delaney’s Disney princess voice made her an Internet sensation. The video has got 10M views and is flooded with over 84k comments, praising her talent and beauty. Delaney couldn’t be happier with people’s reaction to her singing. She said that she performed so differently when she didn’t know a camera was pointing at her. This encourages her to put out her voice there more and step closer to her big dream.

The teen babysitter later astonished her fans on Tiktok. She posted a video showing the moment she was accepted to Berklee College of Music, her dream school. Congratulations! Teen star!

14 Actors Who Brilliantly Reinvented Themselves Across Their Career

How Have Our Favorite A-list Actors Changed From Their First To Latest Movie Roles?

14 Audacious Outfits From Celebrities That Will Shock You

TV Series And Movies Like Young Royals To Binge-watch