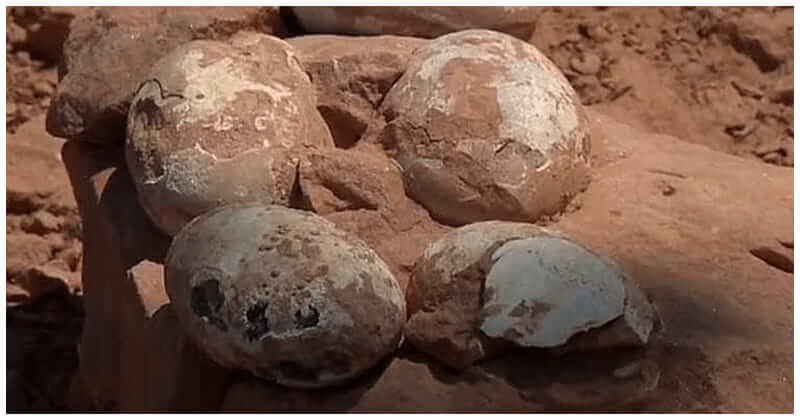 Scientists recently discovered a nest of fossilized dinosaur eggs in Brazil that would have hatched into ferocious carnivores 60-80 million years ago, shouldn’t they have been buried by loose sediment. Initially, scientists thought the well-preserved eggs belonged to ancient crocodiles, because they have unearthed fossilized faeces from crocodylomorph at the site prior to the egg discovery.

The eggs were indicated to be larger and have a thicker shell than the crocodylomorph counterparts, according to thorough examination by a team of researchers led by William Roberto Nava, who revealed that the dinosaur eggs measure 4 to 5 inches long and 2 to 3 inches wide, while the ancient crocodiles’ egg is typically no longer than 3 inches.

Furthermore, the shell of the fossilized crocodylomorph eggs is a porous or smooth texture, while those from the dinosaur have a ‘ripple-shaped’ texture, said Nava, who also stated that ‘they look like little wavy earthworms, which differs from the texture of the crocodile.’

The location in which the eggs were found is the city of Presidente Prudente, in the interior of São Paulo, where the soil gradually transforms into sandstone, helping to preserve the eggs by acting as a natural protector, creating numerous layers of sand over millions of years, until the eggs were pulled out by paleontologists recently.

William Roberto Nava said: ‘Who knows if in one of these [five] eggs we have a fossilized embryo. It would be super cool, it would be something new for Brazil,’ referring to the excavation of an exceptionally preserved dinosaur embryo found in China, whose name is ‘Baby Yingliang.’ ‘Baby Yingliang’ was discovered curled up within a fossilized egg under the rocks of the ‘Hekou Formation’ at the Shahe Industrial Park in Ganzhou City, Jiangxi Province, China, famous for being one of the most complete dino embryos ever found, particularly displaying a posture closer to those found in embryonic birds than commonly seen in dinosaurs.

In detail, Baby Yingliang was close to hatching, with its head below its body, its back curled into the egg’s blunt end and its feet positioned on either side of it. It was from a species of toothless, beaked theropod dinos known as ‘oviraptorosaurs’, according to paleontologists from the University of Birmingham.

The egg was named after the Yingliang Stone Nature History Museum in Xiamen, among whose fossil collections it is held. Meanwhile, scientists think that the embryonic oviraptorosaur might have been around 10.6 inches from head to tail, but was developing curled inside a 6.7 inch-long egg.

‘This dinosaur embryo was acquired by the director of Yingliang Group, Mr Liang Liu, as suspected egg fossils around the year 2000,’ said palaeontologist Lida Xing of the China University of Geosciences in Beijing.

‘During the construction of Yingliang Stone Nature History Museum in the 2010s, museum staff sorted through the storage and discovered the specimens. These specimens were identified as dinosaur egg fossils. Fossil preparation was conducted and eventually unveiled the embryo hidden inside the egg. This is how ‘Baby Yingliang’ was brought to light,’ added Xing.