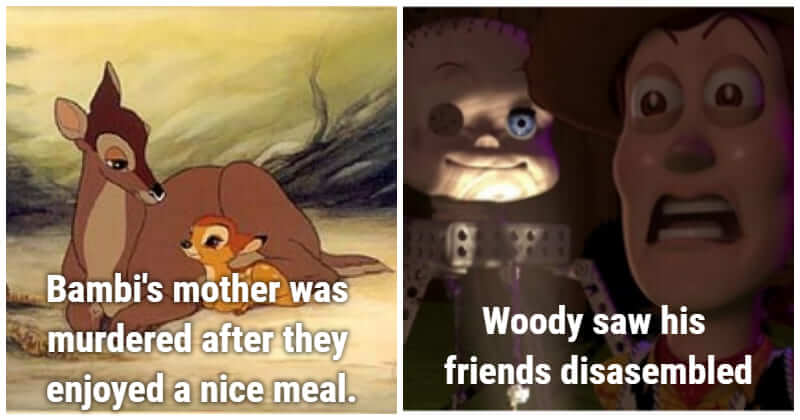 The happiest place on earth is Disney, right? When we think of classic Disney films, we often conjure up images of pleasure, laughing, and heartfelt moments. But think again! Like ancient fairy tales, Disney movies are both fascinating and horrifying at times.

From terrible on-screen death to the evil and creepy plans of the antagonists, Disney films have full of shockingly grim moments that have disturbed those who have grown up watching them. But you were too small to notice these details until years later.

Whether they’re so well hidden that they’re almost impossible to pick or whether they’re moments with implications, here are some of the darkest Disney movie scenes that may scare you as adults. It’s possible that you’ll never view them the same way again. Scroll down to discover.

Bing Bong sacrificed himself so that Joy may save Riley. It’s a sad scene and a little cruel.

Sid dismembered all the other toys and then reassembled them back again. And Woody felt all that torturous pain. It’s terrible!

Cinderella’s stepsisters ripped her dress to tears while she was still wearing it, and her stepmother just watched and smirked.

Mother Gothel stole Rapunzel and imprisoned her in a tower simply because she wants to stay youthful forever.

Bambi’s mother was murdered after they enjoyed a nice meal.

Nala and Simba were relatives because Nala was the daughter of Mufasa. What the hell is it?

Dumbo was separated from his mother when his mother was attempting to protect him. That is cruel to a mother!

Everyone slipped into a furnace when they realized there was no way out. They accepted their destiny.

#10 Snow White and the seven dwarfs

Not only did the cruel queen hire someone to murder her stepdaughter, but she also had Snow White’s heart returned as proof.

#11 The Princess and the Frog

When Mulan’s true gender was exposed, they planned to kill her even after she saved them from the Huns.

Scar threw Mufasa off the cliff but he made little Simba belive that Simba was the one who caused his father’s death.

Cruella de Vil wants to kill and skin hundreds of Dalmatian pups for the sake of a fur coat.

#16 The Hunchback of Notre Dame

Frollo touched Esmeralda, smelled her hair, and it was a sexual harassment.

Tadashi was freaking blown up.

On Pleasure Island, all the naughty boys were converted into donkeys and sold as slaves.

When Clayton and Tarzan’s fight ended, Clayton fell and was hanged by the vines.

Captain Rourke gets crystallized and then sliced apart by a chopper.