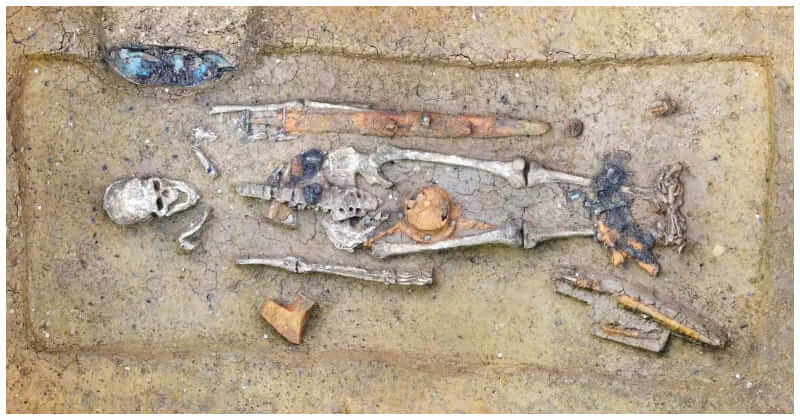 The 1,500-year-old grave of a 40- to 50-year-old male buried luxurily with a horse and fine weapons has been discovered in Bavaria, Germany. Within the tomb, experts also found an ivory comb that might have been used to brush his hair and beard.

Furthermore, a second grave containing the skeletons of a younger woman, entombed with ornate burial items, involving a ceramic bowl from North Africa was also unearthed, questioning scientists on the way these objects traveled to Central Europe. “The two finds must have been real luxury goods at the time,” states Mathias Pfeil, curator-general of the Bavarian State Office for Monument Preservation (BLfD) “They show how far people’s contacts still went even after the dissolution of the Roman Empire and its provinces.”

The region where the man was buried, at around the 6th century, was occupied by Germanic Alemanni people under the reign of the Franks. The strange items found in the tombs are supposed to have been received from a ruler or loot from battles in the location of present-day Italy. The graves were situated in Nördlinger Ries, a 16-mile-wide crater in southern Germany, created as a result of a meteor strike, whose central depression is roughly covered by the ancient village where the burials were carried out.

Archaeologists found that both of the comb’s sides were engulfed with inscribed decorations featuring gazelle-like creatures, after considerable efforts in restoring the heavily-damaged comb.
The animals seem to be jumping away from predators not commonly found in Europe, indicating that the comb’s decorations were loosely based on the scenes of African wildlife. Scientists also noted that such discoveries of elaborately carved ivory items from a long period like the sixth century is very rare, although combs are commonly found in centuries-old European cemetary. Even so, the ivory examples that exist are often inscribed with Christian imagery, rather than hunting scenes.

“We have not yet found any comparable representations on a comb from this period,” says BLfD archaeologist Johann Friedrich Tolksdorf. “That makes this find not only an outstanding archaeological discovery but also an important art historical source.” The man buried with the comb was described as a prominent and wealthy one, based on the items in his tomb, including a battle ax, lance, shield and longsword. And the comb wasn’t the only thing that served the beauty purpose, as experts also discovered a pair of scissors.

Meanwhile, preserved eggs and other food objects, together with with a “weaving sword” used to tighten threads on a loom were inside the grave of the woman, most of which were produced locally. However, there was a bowl that bears the characteristics of African red slip ware, possibily made in the land of present-day Tunisia.

The mentioned ceramics were actively traded between ancient Mediterranean lands, but this is the first time scientists discover the items so far north. The bowl’s base was stamped with a cross, and its rim held markings that were probably magical symbols or letters spelling the owner’s name. The discoveries are prior to a construction plan in the municipality of Deiningen, within the location of more than 100 ancient tombs unearthed since the 1930s. The latest discovery included also consists of a double grave containing a man in his 20s holding the hands of a woman between 25 and 35.

The newly discovered relics are planned to be made accessible to both researchers and the public.