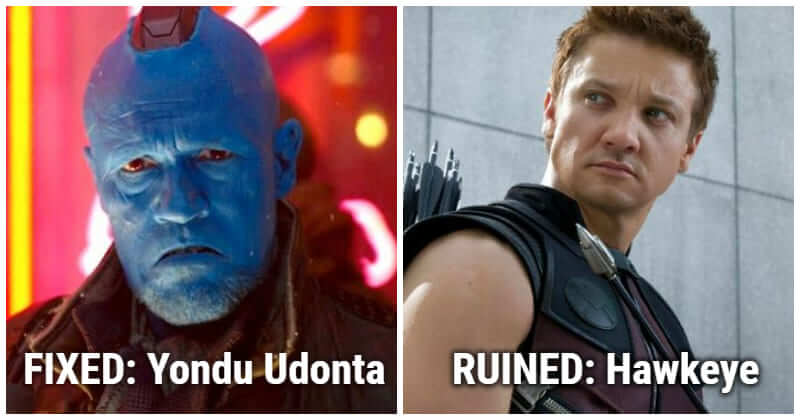 The Marvel Cinematic Universe has actually been an exceptional success. With more than 20 movies, Marvel has a massive catalog of characters. Many of them have become icons that have captured many generations’ hearts. Their names quickly become household names that everyone must hear of sometimes in life such as Iron-Man, Spider-man, or Thor.

However, nothing is perfect, neither is Marvel. While Marvel has genuinely rescued problematic and forgotten characters, many characters appearing in the universe have been disappointments.

Despite spanning over 80 years of history, Marvel actually started gracing the silver screens in 2008 in a shared world known as the Marvel Cinematic Universe. Many improvements in its characters have been recognized in its live-action. Besides, there are also several changes that seem to fall short of expectations. Let’s see which characters are changed positively and vice versa. To be honest, Taylor-Johnson isn’t a bad actor, however, his character in the MCU, Quicksilver, is nothing compared to Evan Peter’s Quicksilver in X-Man, who was appreciated as charming and had memorable musical superspeed scenes. Introduced as the first Avenger in the MCU, Captain America is definitely on top of key characters in Marvel history. The growth of Steve Rogers to become Captain America still captures many hearts. Introduced at the same time as Scott Lang, Hank Pyms was the original Ant-Man. Michael Douglas does a fine job but Hank Pym’s personality should rival that of Tony Stark’s. He’s a strong-headed, wise-cracking genius who comes off arrogant and at times unlikeable. The character Hawkeye was described in the comics as a cool master spy with a bow and arrow. However, his first introduction in the MCU was a cameo in Thor talking with Agent Coulson. It seems that he hasn’t illustrated enough in live-action. Hopefully, his character can appear more in the upcoming Marvel projects. In 2008, on the heels of Iron Man’s success, The Incredible Hulk was released starring Edward Norton. Even though it wasn’t a bad movie, it didn’t leave Marvel fans much impression. Then Norton was replaced by Mark Ruffalo in The Avengers in 2012. This version of Hulk was actually better. Mandarin was known as the leader of the Ten rings organization. He was described as a narcissist who often used extreme violence to get what he wants.

However, it seems that the character was not portrayed correctly by the actor Trevor Slattery because that actor was humorous, but the Mandarin isn’t supposed to be funny… or breathe fire Spider-Man is another key character in the MCU. He’s been in everything from cartoons to comics and had his own great film series before joining the MCU. Tom Holland is actually a good choice for Spider-Man. He sometimes makes mistakes, he is eager to learn and takes lessons after facing problems. Like Captain America, Thor is considered an important character of Marvel history. it could be said that the casting of Chris Hemsworth was perfect. It fits him from his appearance to his personality. Mickey Rourke’s performance is considered a disappointing thing. Even the story about Tony’s father and Vanko’s father working together was confusing, especially because there was no mention of Vanko in the first film. Yondu was introduced as a member of the Guardians. However, the Guardians were also considered silly secondary characters. But fortunately, directer James Gunn changed that in 2014 with 2 successful Guardians of the Galaxy films. The relationship of Yondu and the Guardians’ leader, Star-Lord was admirable.