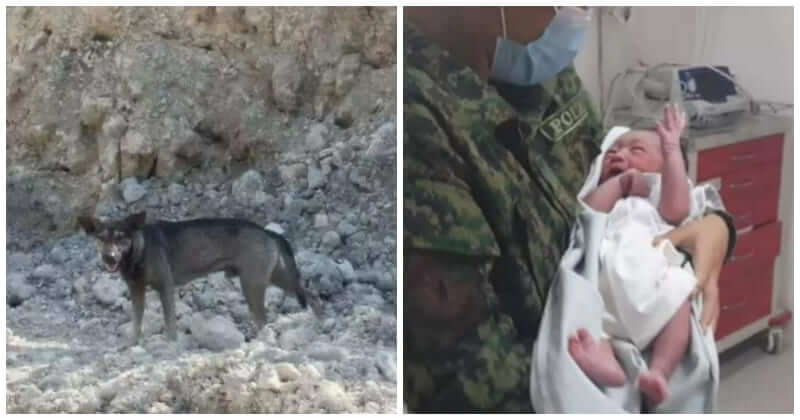 Dogs are known for their sense of smell and sounds, but do you know they have the warmest hearts on Earth, too? A heroic dog has recently gone viral due to its effort to save a newborn human left alone in the mountain.

The dog, later known as Blacky, rushed to find help after he found the baby. He reached out to a man named Junrell Fuentes Revilla, who was riding his motorcycle through the mountains nearby. As the biker recalled the case, he noticed the dog barking non-stop and running after him. He could sense that the dog was trying to tell him something, so he stopped and came to the dog.

Then, he was led to a dumpsite and toward a little squirming bundle on the ground. To his surprise, there was a human baby that appeared to be abandoned right after it was born. Turns out, Blacky’s relentless screaming was to alert him of the baby.

Quickly, Revilla took the baby to the nearest police station, where the Department of Social Welfare heard of the case and leaped into action. It happened near Cebu city in late December. On the same day, the Department of Social Welfare worked with volunteers of Hope For Strays to find the pup, Blacky. However, they found out the man who owned the dog.

“He showed us the way to his home and to our surprise, Blacky was there with three other dogs,” Ybarita, staff at Hope For Strays, told The Dodo. “We’ve confirmed he is not a stray at all.” It was nice to know that Blacky has a loving home. Blacky’s owner was a kind-hearted person who still took good care of his stray dogs although he had nothing with him.

“No matter how hard life is, even though I’m poor, I feed all of my dogs and take care of them well,” said the owner.

After Blacky’s heroics goes viral on local news, many people love him. His owner has received a lot of support from the community, including donations for food, pet supplies, and so on. Blacky has changed the baby girl’s life, for sure, but may he know that he has changed the future for him and his owner as well?

Share this beautiful story with your family and friends.