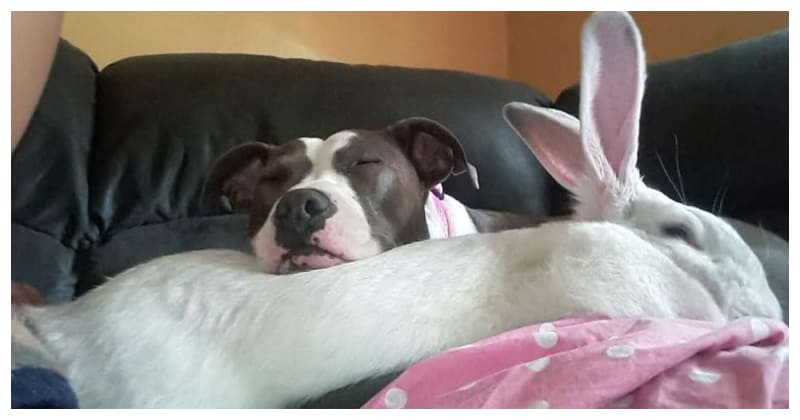 While rabbits and dogs are both sociable creatures, they don’t generally form friendships together. However, the story of Grace the rescued Pit Bull and Sophie the bunny proves that love comes in all shapes and sizes.

Grace was rescued from a fight by Mindy Hayes two years ago, while adorable Sophie was a Flemish giant rabbit adopted to her house last year. The two showed a very strong connection when they were first introduced to each other. “It was an instant bond.” “They smelled each other, and it was all downhill from there,” Hayes told The Dodo.

The two fuzzy sisters became inseparable quickly. Grace wasn’t far behind Sophie to wherever she went. And, as they stayed close to each other, it didn’t take long for their love to blossom.

The sweet pooch started brushing her best friend’s hair, and the pair were often seen cuddling up on the couch together. Like all other rabbits, Sophie did like Grace grooming her hair and petting her. “I can’t keep them apart,” Hayes added. “Grace is constantly following Sophie, laying with her on the couch and licking her head. Grace would groom Sophie until she is sopping wet if I let her!”

“Sophie loves to sit on the couch with my husband and me. As we pet her, she will sit on both of our laps and kiss our hands. When I call her, she comes running and follows us around the home. She’s a sociable and cheerful rabbit!” she said. Sophie is now 11 months old and is still growing up. She can weigh 17 to 20 pounds as an adult. Grace is two years old. Compared to the moment they first met, the unlikely friends now don’t appear to be much different in size. While Grace and Sophie’s bond is familiar with members of Hayes’ family, many people outside are astonished to hear of their relationship. Best wishes to beautiful Grace and Sophia! Treat Your Pets Like Royalty With Renaissance Masterpieces And Royal Portraits

This Lap Cat Decides To Become A “Cap Cat”