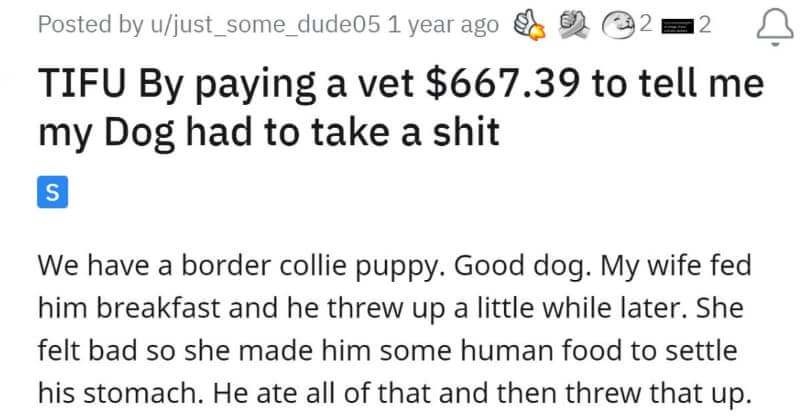 Dogs don’t speak human language, so it’s can be hard to understand and communicate with them. And, if something wrong happens to your dogs, it’s even harder to figure out what it is, how dangerous it can be, and how bad it makes your dogs feel.

Taking your dogs to the vet is highly recommended in this case, so that they can get diagnosed and receive in-time treatment. Sometimes, it can be symptoms of a serious disease, but sometimes, the reason can be simpler than that.

A man has recently shared on r/tifu how he was messed up after taking his “ill” dog to the vet and paying $667.39 for all of the required examinations to learn that his dog just needed to take a sh*t. The post has gained 5.4k upvotes and nearly half of a thousand comments. It’s not hard to see why the man is pissed off at the vet. His dog’s vet bill costs $667.39, which includes an IV, an examination check-up, and an X-ray. After all, he thought it was ridiculous and all of these examinations were unnecessary. Also, he claimed the vet’s fault for giving the wrong prediction and causing him to spend a large amount of money unworthily.

However, Redditors don’t think so. The vet reasonably guessed the dog was blocked up by a foreign object and then did a test to confirm or deny the guess. Unfortunately, the test confirmed the blockage and denied the subject. This was part of normal procedures, and there was nothing to doubt it. OP should have been happy that his dog didn’t need surgery or further treatment. Other people shared their experience at the vet, too. Welcome To Nyan Nyan Ji, The Cat Shrine In Japan With The Cutest Monks Ever

Dog Refuses To Leave Trapped Friend’s Side Until Help Arrives

Reddit User Cries Out To Know Her Street Dog’s History, And Other’s Pet Adoption Stories Start To Roll In