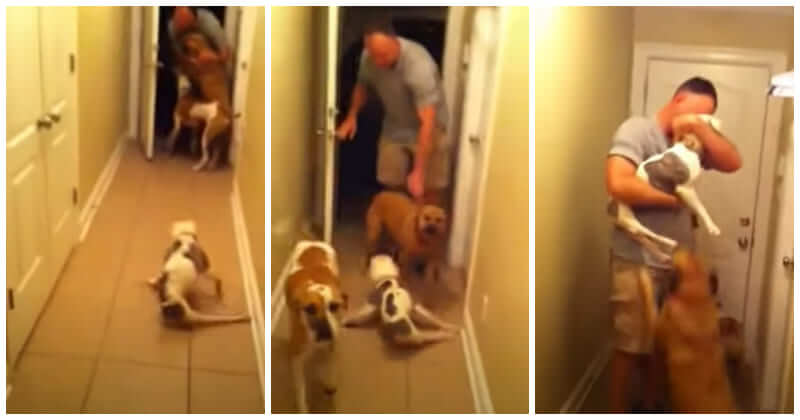 Dogs are known for being incredibly loyal, and there are a thousand reasons to tell why it is so true. These creatures only have you, so they will never leave your side. Seeing you come home after a long day can make them happier than ever.

If you don’t believe it, the Pitbull in this video will prove that to you. Her soldier dad who often works overseas hasn’t returned home for over six months. And, the moment he appeared at the house, beautiful Emma was seen using two front legs rushing to greet her dad. The moment has taken the Internet by storm with approximately 7M views on Youtube. Emma was born with a severe condition that left her unable to use her hind legs. Needless to say, the life of the little girl was tough from the beginning. She was often left at the shelter while other dogs were quick to find their new home.

She ended up in a special needs dog rescue group, where she first met her loving parents and managed to steal their hearts at first sight. She formed a strong bond with them since then. As you can see in the video, Emma hurried down the hall to meet her beloved dad as he opened the door and smiled at her. You may ask in your mind why Emma doesn’t have a wheelchair to help her with her movements. Actually, she used to have some, but none of them made her feel comfortable at all.

Best wishes to Emma and her beautiful family.

Meet Louis, The Moody Persian Is Being Dubbed The New Grumpy Cat