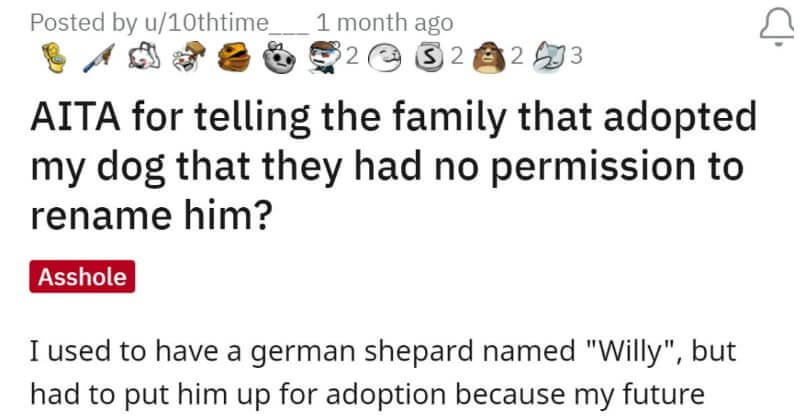 A dog that has recently become the center of the Internet after a fight between its previous owner and the new ones. The former owner has recently shared the reason on r/AITA, for which he received a lot of dislikes from netizens.

OP (original poster) told that he used to have a German Shepherd named Willy, whom he put up for adoption as his fiancee and future stepson moved into his house. Although he managed to find Willy a new home, he kept in contact with the new owners to update how he was doing.

It didn’t take long for Willy to get used to his new home. OP was happy to know he was living in good love and care. Until one day, when he was on the phone with Willy’s new mom, he was shocked to learn that the dog had just been renamed “Rudy”.

Showing his disagreement, OP said that all of the dog’s papers were under the name “Willy”, and changing the name made it difficult for his identification process. The family, on the other hand, denied that and claimed their right to rename the dog because it belonged to them.

OP went mad, had a fight with them on the phone and social media. When they threatened to block him, he even came to their house to continue the argument. His fiancee advised him to stop the fight and let them do what they can. However, OP threw a tantrum on her and started blaming her and her son for Willy’s being renamed. Netizens showed their disagreement with OP, saying that his behaviors were irrational and insane.

It was their dog now, so OP didn’t have the right to tell them not to have the dog renamed, especially when he gave up on the dog.

He was kind of aggressive when constantly harassing them because of a dog’s name. Threatening them on FB and entering their property without permission is harassment. They could report him to the police. OP blaming his fiancee and stepson seemed unreasonable as well. It was all about his choice to give up on his dog.

See more of their reactions here. Amazon Is Selling Dog Pajamas That Stop Your Dogs From Shedding

Meet 20 Dogs Who Are Angels In Disguise