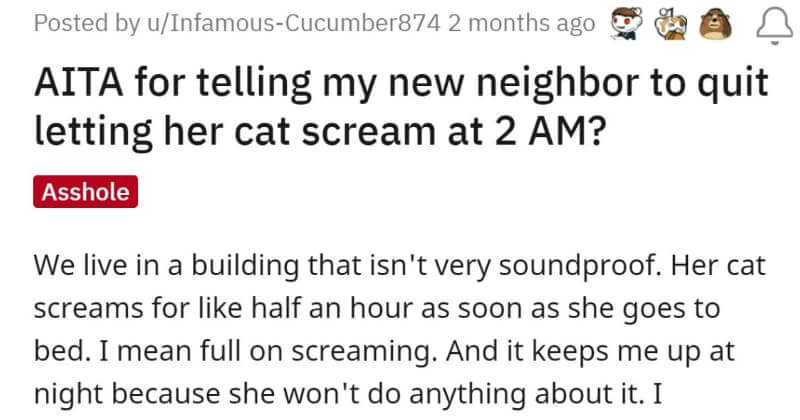 Getting along with neighbors is never easy. Sometimes, we need to put down our egos and learn to sympathize with each other. Reddit user @Infamous-Cucumber874 woke up in the middle of the night and found him in an annoying situation coming from his new neighbor.

As he shared in his Reddit post, the neighbor just moved in several days ago, but her cat made noise at 2 A.M every night. When he brought up his problem, the neighbor said that her cat had separation anxiety that she had to leave the bedroom door open at night. She felt sorry for that.

OP started suggesting tons of solutions which she got an excuse for each and ended up saying there was no probable solution as she’d tried all. OP became impatient and threatened to report to the police on her cat’s annoying sound. Meanwhile, the new neighbor wanted him to leave her house, otherwise, she’d call the police. If you take everything into consideration, it’ll be easy to claim that OP is wrong. His new neighbor just moved in with her cat for several days, therefore, the cat might not be accustomed to the new house and might scream. It was like babies getting used to a new place. Then, it was his fault for not checking the sound insulation of the walls before deciding to purchase his apartment.

Some people advised OP to install sound insulation at his home, instead of spending time at his neighbor’s house leaving the problem unsolved.

More and more netizens were standing for the neighbor. Let’s see their reaction here.

No One Wanted Him Because He Looked Like A “Animal Joy”, Until One Person Saw The Cat Underneath…

What To Do When Neighbors Hate Cats And Launch A Bunch Of Noisy Deterrents That Disturbs Others?