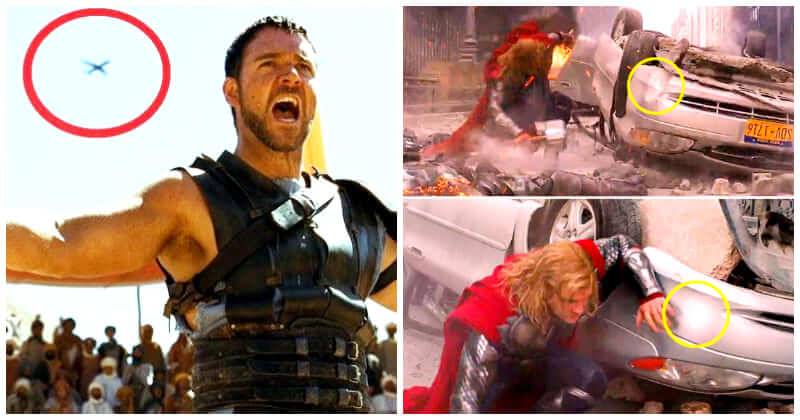 Seeing these filmy errors 2021 and you will have different views about your favorite movies. The best films construct universes that appear to be created with ease. When a film is well-made, the viewer isn’t aware of the aspects that help to create a unified sense of time and space. Because they’re absorbed in the onscreen environment, they’re not concerned about lighting, camera movements, or the set. Continuity is a concept that is difficult to grasp. Even if the two frames were taken months apart, a person opens a door, and the next transition displays a continuous motion as the door opens in the next area, with the character’s clothes and hair identical.

However, some mistakes go overlooked until it’s too late in the post-production process to fix them, and viewers, shockingly, overlook them. Hardcore fans, on the other hand, always revisit the films, which is how they catch these errors. Today, we’ve compiled a list of 15 movie errors that slipped unnoticed on the first view. Thanks to those who kept an eye on things and pointed up the errors.

#1 In the movie Gladiator, we can spot an airplane in ancient Roman times. Pretty sure there were no flying machines in that era.

#2 In Ted, John was seen holding his phone upside down in one of the scenes. #3 In the movie The Usual Suspects, the airplane can be seen with 4 engines but few scenes later, it goes down to 2 engines. No they did not fail, they just disappeared. #4 In the Marie Antoinette biography, a rather modern pair of shoes was seen while the movie was set in the 18th century – Filmy errors 2021 #5 In the movie Aliens, Kane is seen wearing a cap under his spacesuit helmet. And in the hospital scene when the helmet it removed and an alien attached to his face is seen, there is no presence of the cap. #6 In the classic Pirates of the Caribbean, perhaps there were a few pirates in his crew that were rather too modern for that time. Check out that person far left.

#7 In Terminator 3, the plane in which John and Kate fly, the number on the plane magically changes from N3035C to N3973F when it lands. #9 In the movie Dallas Buyers Club, you can see a poster of the car Lamborghini Aventador in the back. The movie is set in 1985 and the super car was released in 2011.

#10 In the first Avengers movie, when Thor destroys everything around him in the battle of New York, one car’s bumper magically gets repaired as can be seen in the image below – Filmy errors 2021 #11 Another mistake from Terminator. Terminator shields John from the bullets that poke holes in his jacket. In the next scene, the jacket can be seen as new without any bullet holes.

#12 In the movie Terminator, when the T-1000’s truck falls over the bridge while he is chasing John, the front window breaks off and in the next scene, they are back. #13 In the movie Avatar when Jake opens the capsule, the wheelchair is nowhere to be seen and it reappears in the next scene as he gets up.

#14 In the movie Twilight, a reflection of the camera can be seen in many scenes, a rookie mistake – Filmy errors 2021

#15 In the movie Inglorious Bastards, one of the German officer’s badge disappears in a scene and appears back in a later scene – Filmy errors 2021