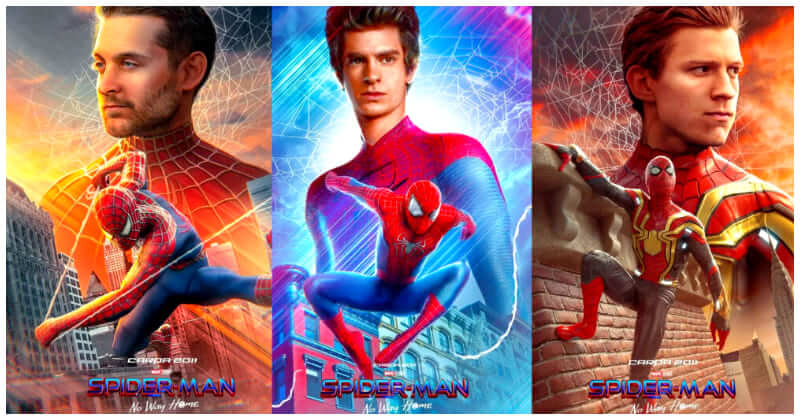 The buzz around Spider-Man: No Way Home is unavoidable right now. Viewers are recording cinema screens as crowds gasp at Andrew Garfield and Tobey Maguire’s unexpected entrance, swept up in a swirl of charming nostalgia as our trio of webheads face a range of famous villains. No Way Home has been dubbed the “coming of the multiverse,” an expansion of the Marvel Cinematic Universe that will permanently alter its course with unforeseen narrative twists and character moments that attempt to usurp the underpinnings we’ve come to know and love over the past decade. In many areas, it accomplishes this goal, but in others, it devolves into a condescending, emotionally manipulative mess that substitutes half-baked references and callbacks for fresh new ideas to keep our attention instead of really being a good film.

Maybe I’m just a grumpy old scrooge, or maybe my attachment to the classic movies isn’t as strong as I previously believed, but I can’t help but think Tom Holland’s newest adventure should have been so much more. It has all the components to take this cinematic world to new heights, but it leans back on old habits far too frequently, even when such decisions have yielded massive movie office triumph. However, after everything is said and done, it leaves a hollow feeling. Andrew Garfield & Tobey Maguire have become official members of the MCU, even though their participation has been all but official for the previous 12 months thanks to leaks and conjecture. Doc Ock, Green Goblin, The Lizard, Sandman, and Electro are among the characters that have appeared from their respective universes to disrupt Tom Holland’s day and demonstrate the repercussions of his deeds. The tension between Peter Parker and Doctor Strange only adds to the stakes of what should be Holland’s biggest and finest movie yet. Unfortunately, everything fell apart for me. Major story issues, such as the ramifications of Spider-Man’s real identity, are quickly glossed over. When Matt Murdoch shows up and assures him that all case was dismissed and he can return to school, the only actual price of this revelation is that Parker and his friends will be denied from college, which is a fairly reasonable outcome given that you’re a vigilante who killed Jake Gyllenhaal. No enemies use his identity to go after his family and friends, or even to manipulate colleague heroes into participating in a twisted scheme they don’t want to play. Peter Parker becomes the MCU’s Logan Paul, a viral hit brought on by events beyond his control. Our hero’s troubled lifestyle is what leads him to seek Doctor Strange and rip the cosmos apart. It’s not a life-or-death scenario; instead of transforming the story into a tsunami of memes and Easter eggs, it would have been considerably more fascinating to see the movie embrace this framework. The multiverse might have made Garfield and Maguire legitimate MCU characters, and the same could be said for their respective antagonists, but instead, they’ve forced appearances with terrible language and half-baked fight scenes that seem terribly out of place. Andrew Garfield’s entrance sparked everything. As he hunts for Peter Parker, Ned opens a portal with his newly found skills, and a webhead emerges – but not the one we anticipated. Garfield exits the portal and is accused of being an impersonator, with Ned and MJ pleading with him to show his superhero status until he relents and climbs to the ceiling, even cleaning cobwebs for Ned’s mother while he’s up there. A sequence that has been the topic of infinite conjecture and expectation boils down to a scene in a living room where the same hackneyed, self-referential MCU speech is spouted out with exuberance that is a little flabby. Maguire also emerges in the same scenario, waltzing through a portal to a storm of applause from the crowd, further adding to the confusion. He makes jokes and fails to see the severity of the issue, which should not be annoying but it is. If only the MCU could take itself seriously for a single moment without devolving into Whedon-style quips and wisecracks that make no sense thematically Garfield and Maguire’s characters aren’t used to the extraterrestrial or Avenger-level dangers in Holland’s reality, so they should be freaking out right about now, but rather they act as if you’ve just run into them on the street and struck up a chat. It’s as though their characters are mindful of how blatant the fandom service is to the waiting audience, and they play within those parameters rather than attempting to expand or even disrupt our expectations. No Way Home reduces these characters to little more than thoughtless one-liners and lighthearted callbacks to previous misadventures, but it refuses to let them accomplish anything else. Garfield and Maguire do their best with the content they’re given, but their participation in this different universe is given so little time to breathe among the humor and set pieces that their farewell is much too quick. You could construct a whole series of movies with unique narratives following three Spider-Men amidst the multiverse, and perhaps the MCU will do so in the future, but for now, it feels more like fan service dependent on Disney’s monopoly on the world’s media than a real expression of innovation. The movie’s antagonists are equally underdeveloped. In any case, Electro, Sandman, and The Lizard have mediocre performances, but Green Goblin and Doc Ock, played by Willem Defoe and Alfred Molina, steal the spotlight. They’re fantastic portrayals of these individuals, and they’re the only ones who appear to understand the significance of being thrown into a new reality. Their plots explore the topic of morality in the context of a new plane of existence, as well as how individuals are willing to change for the better when given a second opportunity. Even if such naive ideas end in the deaths of people he loves most, Holland’s major purpose in the movie is to prove that these monsters deserve a second shot, and he seldom wavers from this stance of moral superiority, which is a strong message that could have been emphasized much more. Perhaps this viewpoint is unduly pessimistic, or it casts too harsh a judgment on a superhero movie. However, when a movie brings in millions of dollars and has a significant influence on the MCU and other blockbusters, it’s worth thinking how a movie this shallow and pandering can only help to tarnish the artwork we know and love. It’s placing a reference to our own nostalgia in front of us and asking us to applaud like submissive young seals, even while the substance evaporates away into oblivion minutes after we turn away. Perhaps we could wish for more, or that Maguire and Garfield would be given more screen time in a picture that is almost entirely dependent on their participation. Superhero movies can and should be better, and No Way Home came very close to breaking the pattern before opting to follow it in the most formulaic way possible.