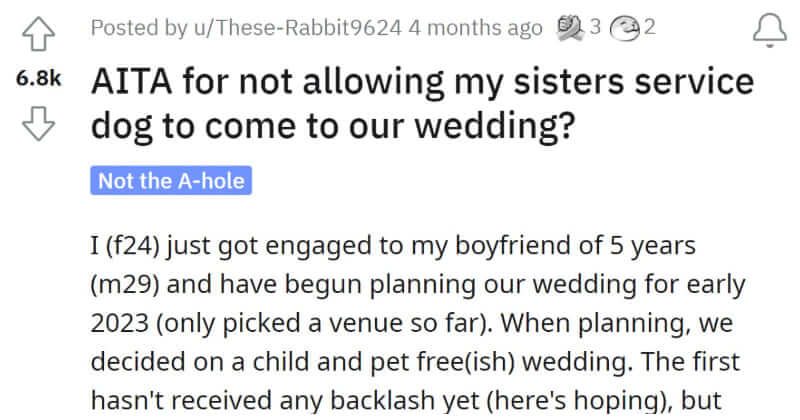 A wedding is an important event that both the bride and the groom want to make perfect. Therefore, a wedding is often prepared in advance to make sure all unexpected incidents can be avoided and that the wedding can’t be an awful memory. That is why Reddit user @These-Rabbit9624 decided not to allow pets and children at her wedding celebrated in early 2023. The reason was simple. Her fiancé got attacked by a Golden Retriever that left him uncomfortable staying around all Golden Retriever dogs.

The thing was that her sister had a Golden Retriever as a service dog. When she was informed about the rules, she got upset and started talking about how she was discriminated against because of her dog. Meanwhile, OP (original poster) kept thinking of her sister’s strange reaction because she seemed fine when she visited her and her fiancé several times without her dog (she came with her mother instead).

Things became worse as her parents decided to stand by her sister. From their point of view, it was unacceptable not to allow her service dog to come along because that resulted in the sister not attending the wedding, too. OP suggested inviting her sister to an individual dinner before or after her wedding, but her parents disagreed and threatened to claim ADA laws against her. Everyone, give OP some advice. Read the full post here. After her story was posted on Reddit, over a thousand netizens gave their opinion on the problem before deciding that OP was “Not an A**hole”. Her reason for not allowing her sister’s dog at the wedding was clear enough. Her future husband, as the center of the wedding, had problems with Golden Retriever dogs. And allowing the dog meant that her wedding couldn’t happen probably. Her parents’ threatening not to come and use the law was ridiculous and unreasonable. Reddi user @Consistent-Leopard71 ended up wondering why the sister who could come with her mother to visit OP could not come to the wedding under her mother’s supervision instead. However, there were some counter-arguments against his opinion. So Eager To Go To Pet Daycare Center, This Dog Walked Herself At Dark Night To The Center!