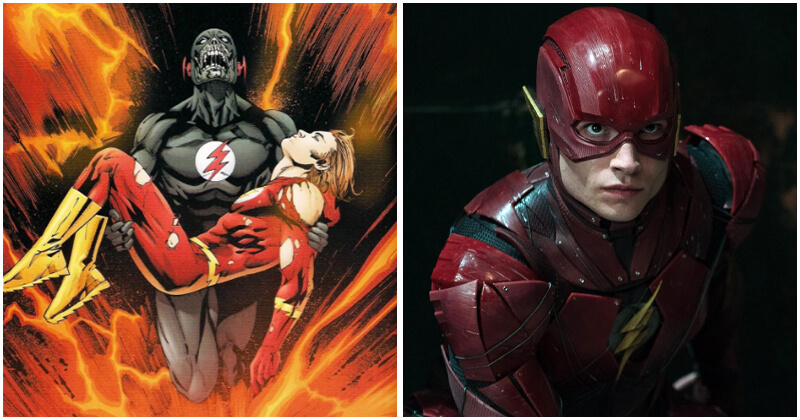 Here’s a new clue coming straight from crew merchandise of The Flash. It seems, in fact, that the t-shirts reserved for the production crew, in particular for the stunt team, has revealed who will be the villain of the film starring Ezra Miller. Recently, one of the stunt doubles who participated in the upcoming superhero movie has shared a photo of one of these t-shirts on social media and in addition to the silhouettes of the already known Batman and Supergirl, there is another one that appears to belong to the Black Flash.

Indeed, the presence of Black Flash would coincide with the news and information circulating on the internet lately. Last August, there were rumors that Ezra Miller’s Barry Allen was facing an evil doppelgänger. And in the trailer shown at the DC FanDome not long afterward, it was possible to see how two Flashes were present in the same scene, both played by Miller.

Obviously these are only just guesses, also because the shirt mentioned above is not so detailed, but the possibility that the one in the graphic is Black Flash is actually considerable. Created by writers Grant Morrison and Mark Millar, and artist Ron Wagner, this character is like the Grim Reaper for speedsters of the DC Universe. As for the film itself, this new work will definitely be an important chapter for the fate of DC characters in the cinema. Just like Flashpoint in the comic world, The Flash will be an opportunity to cancel, on a narrative level, most of the storylines of recent years to start with a new structure. For example, it seems that Ben Affleck’s Batman will lose his life in the movie to make room for Michael Keaton and the actor will reprise his iconic role to become the “official” Batman of the DCEU.

The Flash, directed by Andy Muschietti, will hit theaters on November 4th.