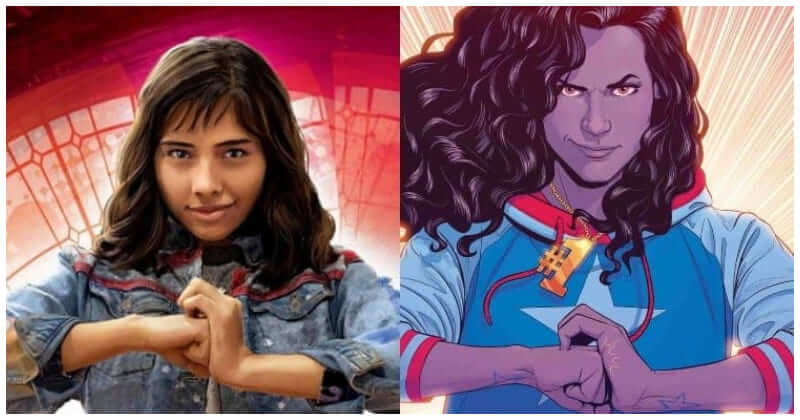 The Marvel Cinematic Universe is set to be hijacked by America Chavez. America, Marvel’s most popular lesbian superhero, has long been a comics crowd favorite, and it’s about time we got to meet her on the big screen. We’ll have that chance soon, since she’ll star in Doctor Strange in the Multiverse of Madness, which will be released on May 6. We believe her persona will be changed from her popular comic book counterpart based on casting and trailers, but we wouldn’t be sure how yet. So, before you go see the movie, here’s everything you need to know about the elegant and strong Latina lesbian. Chavez was initially introduced in the Vengeance #1 comic by Joe Casey and Nick Dragotta, but she had a very different appearance and behavior. She was a member of the Teen Brigade with Ultimate Nullifier when she first arrived. That squad was pitted against the Young Masters of Evil, a villainous team. In the comics, America’s backstory has been altered. The character’s early origin story was that she was raised on the all-female parallel universe planet of Utopian Parallel. However, as the Utopian Parallel seems to have been annihilated, her mothers sacrificed themselves, and Chavez fled, journeying through other multiverses. She arrived on Earth, notably in a Puerto Rican neighborhood in New York City, and was welcomed into the society.

#3 And Her Revamped Origin However, America’s history has recently been rewritten. It was discovered that she had a previously unknown sister, Catalina, who assisted America recall that her parents, Amalia and Elena Chavez, were not aliens, but human physicians. They transported their girls to the Utopian Parallel, a remote island where they hoped to treat Edges Syndrome. They soon discovered, however, that the island’s master had nefarious plans for their children, and they killed themselves in an attempt to liberate them. Only America was able to escape. America concocted the extraterrestrial narrative as a coping mechanism, according to her sister. America Chavez boasts the abilities of flight, incredible strength, and durability, allowing her to battle toe-to-toe with some of Marvel’s most powerful characters. She can also punch holes in realities in the shape of stars, allowing her and her allies to travel around the multiverse. In the forthcoming Doctor Strange in the Multiverse of Madness, this power appears to be extremely important. America is known for her daring flirting and impulsive confidence. She isn’t hesitant to interact with other women characters, and it usually works out. She also prefers to do things her way, and when others say “America, no,” she answers with “America, yes!” She’s become rather independent because of her dimension-hopping abilities, but she’s also learned to love her selected community via the Young Avengers. Chavez’s popularity skyrocketed once she joined the Young Avengers in Kieron Gillen and Jamie McKelvie’s 2013 comic book. Kid Loki, Wiccan, Hulkling, Prodigy, Noh-Varr, and Speed, as well as Kate Bishop’s Hawkeye, all appeared in the issue. In the comics, the gang formed a selected group, and they are still close buddies to this day. America received her own standalone comic in 2017, making Marvel’s first lesbian heroine anchor her own comic. Gabby Rivera, a queer Latina, penned it. She was an undergraduate at Sotomayor University, dating a nurse, and friendly with her old Young Avengers comrade Prodigy in that story. Since the conclusion of that story in 2018, Chavez has joined the Ultimates, a group of cosmically-powered superheroes led by Blue Marvel, as well as the West Coast Avengers. Kate Bishop’s solo Hawkeye series included her multiple times as well.

#9 Her Relationship with Kate Bishop Kate Bishop, who succeeded Clint Barton as Hawkeye, is Chavez’s most well-known romance. The pair have never truly dated in the mainstream world, although they continually flirt and are great friends till the end. Kate once wondered whether she was the group’s lone straight member while they were both in the Young Avengers. America said, “Princess, I’ve seen the way you look at me.” “You’re not that straight.”
In another universe in which America is a member of the A-Force, an all-female Avengers team, she encounters Lady Katherine of Bishop, another incarnation of her closest friend, and the two have a love relationship.
Because Kate Bishop is 22 and Chavez is portrayed by fifteen-year-old film star Xochi Gomez, these 2 will have a totally different connection in the MCU. Following the success of Disney+’s Hawkeye show, Yelena Belova appears to be taking America’s position as Kate Bishop’s feisty BFF. America dated Lisa Halloran, an EMT, in her own series. Even though Lisa was wonderful for America, encouraging her in opening up and being more loving, the two split up when it became obvious that they were on different paths in life. She’s still there in the Marvel universe, where she’s acquainted with Jane Foster and the 2 of them share a common interest in dating superheroes. She’s currently a part of the Damage Control team.