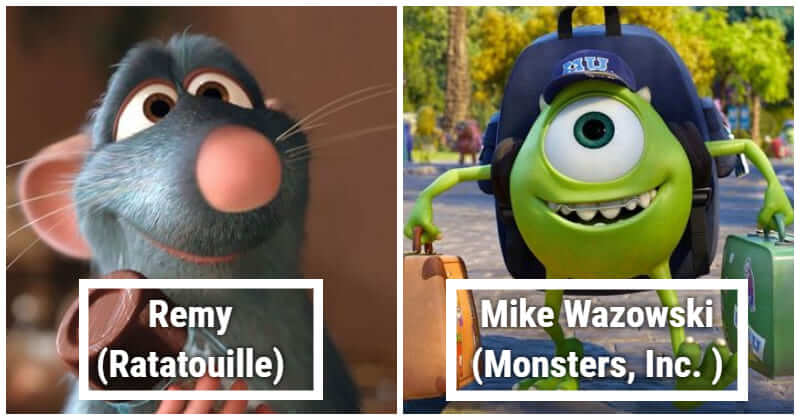 Over the years, Pixar characters have been known for their amazing looks and personalities. Some are witty and energetic, while others are awkward and comical. Especially, some characters possess outstanding brains and are exceedingly smart.

Their intelligence is the result of perseverance and hard effort in the face of hardship. It may also be shown in their general knowledge and ability to solve problems with inventive solutions. One thing is certain: these characters are some of the most clever ever seen on Pixar.

So, who are they? Scroll down to discover. And if you have any other candidates, please feel free to share your opinions with us, using the comments box below. Mike is witty, clever, and brave, and he’s also a committed and loving friend. Mike was more determined in Monsters University, where he aspired to be a Scarer in the elite Scaring Program. After putting in a lot of effort and studying, he got admitted into MU earned accolades from his professor. Mike was employed by Monsters, Inc. after being expelled, and he and Sully worked their way up the food chain, ultimately becoming the finest frightening combo despite Mike not being a Scarer himself. Flik is an inventor who creates a variety of items with the aim of benefiting his colony. His innovations, like those of many other inventors, occasionally result in terrible events, which is why many of his inventions are written off as failures. But he sometimes has brilliant ideas. For example, he introduces larger bugs to combat the grasshoppers or makes a makeshift bird scare the grasshoppers. Unfortunately, a number of his brilliant ideas failed due to unforeseen circumstances. It’s true that Queen Elinor is the most intelligent character in “Brave”. She works as a diplomat to keep the four tribes at peace. Everyone seeks her guidance, and she also serves as Merida’s tutor, ensuring that her daughter learns everything she needs to know to become a queen. Her intelligence and composure have gained her so much respect that she can command the attention of a whole room just by coming in, even if people are engaged in a quarrel. Remy is a smart rat with a keen sense of smell, able to detect even the feeblest aromas. With a passion for food and aspirations to become a professional chef, he always tries his best to make a wide range of delectable delicacies. Unlike other rats, he is capable of comprehending what humans have to say to him. Despite all odds, he became a successful chef who impressed even the harshest critics. As Radiator Springs’ doctor and judge, Doc Hudson has a lot of clouts. He has strong ideas about the types of automobiles he wants in his community. He might be a stubborn automobile with few words at times, but he can also give very insightful advice, such as turning right to go left. He was also known as The Fabulous Hudson Hornet, one of the most well-known racers. He won three Piston Cups in a row and had a few tricks under his sleeve that enabled him to win races despite not being the fastest driver on the circuit. Sheriff Woody is an antique cowboy doll that formerly belonged to Andy Davis. He is known as the leader of Andy’s toys. At this position, he became highly bright, devising strategies that have rescued a number of toys. He gives clear, easy-to-follow directions to other toys. Before becoming a villain, Syndrome’s intelligence made him both rich and successful. He finally invested all of his resources in weapon development, with the objective of turning everyone into a Super. He summons a number of heroes to face his Omnidroids, slaughtering each and everyone that arrives before Mr. Incredible. Edna Mode is well-known for her diminutive shape and habit of addressing everyone as “dahling.” She is an expert in her field. Above all, Edna Mode demonstrates her abilities and employs her creativity to its maximum potential. Edna creates Supers’ outfits, and she knows more about their abilities than they do. She made flawless costumes for the whole Parr family, including one that was astonishingly suitable for Jack-Jack before he discovered his abilities. Wilden and his family lived in a world where magic was the primary source of power. However, because magic was so difficult to employ, it was gradually abandoned in favor of other options. Wilden died, leaving his kids a magical staff and a spell. Although he mostly worked as an accountant, he had some magical understanding. WALL-E is a robot that cleans the Earth while people are gone. He has mysteriously gained a “personality” and has learned to fantasize about friendship by watching classic musicals on TV, He fantasizes about the romantic possibilities of the world “out there,” the world “outside of Yonkers,” while listening to the Broadway song “Put on your Sunday clothes”. WALL-E is intelligent enough to steal pieces from other members of his species in order to extend his own longevity.