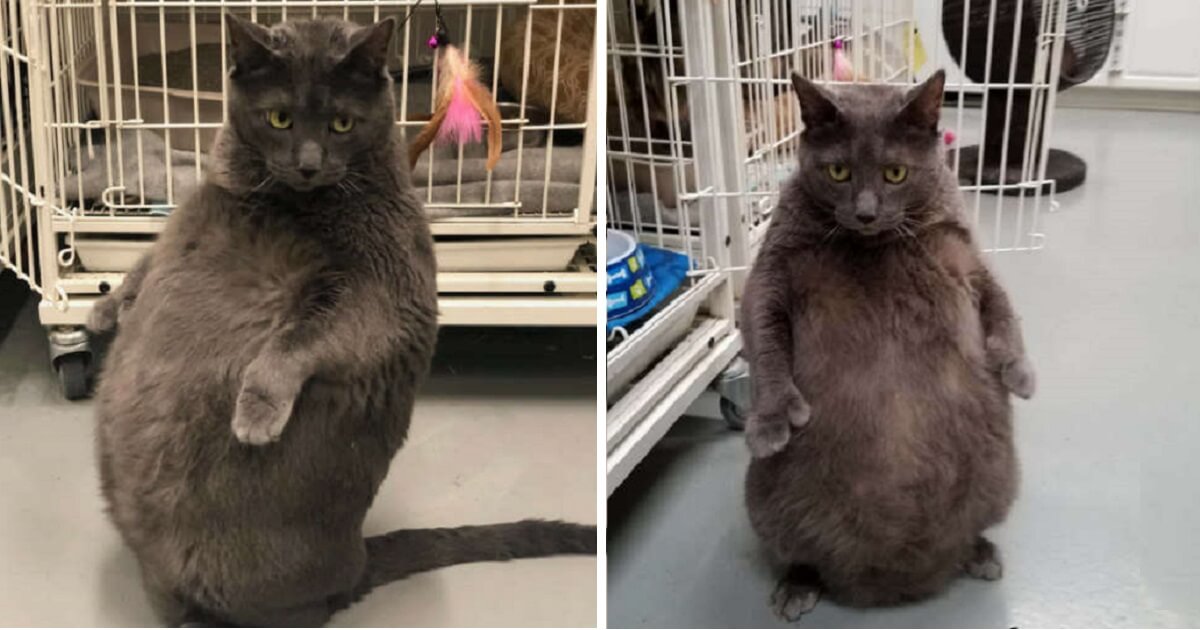 A giant potato-shaped cat named Bruno who resides in a shelter in suburban Morton Grove has taken the internet by storm. Bruno moved into the shelter Wright-Way Rescue in Illinois in April when his previous owners brought him in because he wasn’t meshing well with the family’s kids. Staffers at the shelter think it had more to do with Bruno’s weight. Bruno is a tad overweight at 25 lbs, it would be hard for him to run away from kids whenever he needed his space, but his pot belly doesn’t stop him being the coolest cat around.
The Wright Way Rescue is hoping to find a home for the cool, chubby cat. Bruno is a very large, goofy cat who just wants a little love and attention. The quirkiest thing about Bruno is that he loves standing on his hind legs. He does it whenever he wants food, and with the way he poses and the adorable faces he makes while he’s standing on his hind legs.
Since his photos went viral, adoption applications have flooded in Australia and Canada. He probably won’t be a shelter cat for long. Bruno would do best in a home with no little kids, with a family who will help keep him active and playful so he can continue on his weight loss journey.
One Chicago woman named Lauren professed her desire to be Bruno’s cat mom in a song she performed just for him. To pad her chances of being selected, she submitted a letter of recommendation which written by her boss to the shelter. Wright Way Rescue is reviewing them very carefully to make sure that this cool cat gets the forever home that best suits his needs. Good luck Lauren!
If you’re interested in adopting Bruno, you can contact Wright-Way Rescue for more information.

Congratulation Lauren Paris! Wright-Way reports that Bruno chose her to be his new mama on Monday. Bruno will stay in Chicago, and we hear his forever home is a beautiful apartment with amazing views of the city. Fans can follow his story on his new Instagram account @TheeBrunoBartlett. Bruno is a tad overweight at 25 lbs, he loves standing on his hind legs. Bruno is a very large, goofy cat who just wants a little love and attention. The Wright Way Rescue is hoping to find a home for the cool, chubby cat. He probably won’t be a shelter cat for long. One Chicago woman named Lauren professed her desire to be Bruno’s cat mom in a song she performed just for him.

UPDATE: Yesterday I was inspired to submit an adoption application for Bruno the cat at Wright Way Rescue – who's since gone viral! They have APPROVED our official application, and confirmed receiving the additional materials submitted via FB message: letters of intent, recommendation, and videos of us and our home (I’m a little extra, just like Bruno). So nice of them to take the time to do so, during this exciting and overwhelming time for the shelter!Second City’s own Kathleen Gibson was inspired by Bruno (who wasn't) to write us this song. We’re very serious about this adoption and really hope we’re selected to meet Bruno next week, but as Kathleen said: “either way we created something beautiful today for an Internet cat we’ve never met so everyone wins”. #BodyPawsitive #RealCatsHaveCurves

30 Funny Animals In These Weird Situations Will Crack You Up

Tiger Gives Birth To Lifeless Cub, The Miraculous Resurrection Of The Tiger Cub