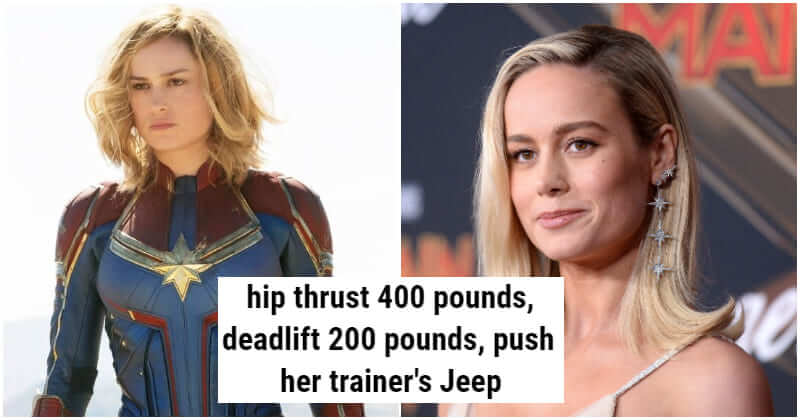 The next “Captain Marvel” movie is coming up in cinemas and here we have the main actress Brie Larson for some behind-the-scenes information! In an interview with Insider, Brie Larson revealed that the training for Carol Danvers was way more demanding than she expected. According to Larson, a typical routine of hers would include pushing a nearly 5,000-pound Jeep with her trainer inside, hip-thrusting 400 pounds, and deadlifting 200 pounds.

With this arduous training routine, Larson wasn’t disheartened but grateful instead. She was thankful that this great challenge had helped her overcome her own limit and push her further. Up to now, fitness has become a huge part of her regular routine. Every workout to her was like an exciting exercise as she kept on with her difficult training routine and her body got used to it. Larson said that doing a one-arm pull-up was her main goal. Now, as she had achieved this goal, she aimed to do the one-arm pull-up. Carol Danvers’ power has become stronger and stronger and so have Larson’s real-life capabilities! Brie Larson successfully made her MCU debut with “Captain Marvel” in 2019, and has appeared in “Avengers: Endgame” and “Shang-Chi and the Legend of the Ten Rings”. The actress said she would return to the big screen with a new MCU movie but refused to share more details about it. Let’s look forward to hearing more news from her and Marvel in the future!