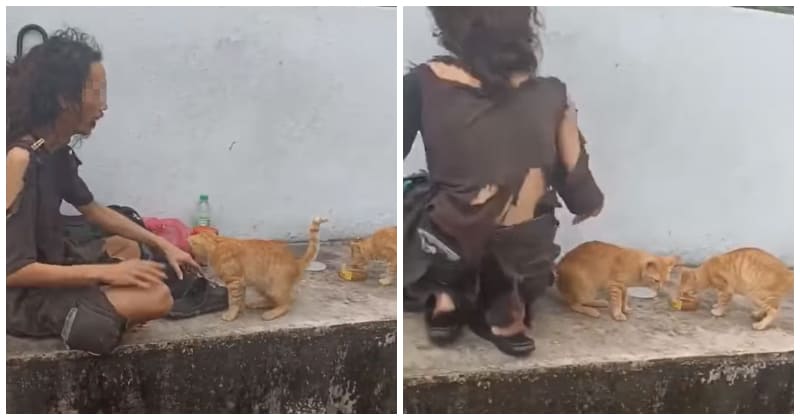 A video capturing a man in ragged clothes feeding the stray cats has recently become viral on the Internet, proving that you don’t need too much to be heroes. The man’s selflessness towards animals has touched thousands of hearts on the Internet. Please watch it now:

The 42-second-long video started with the man, filmed by a delivery rider, sitting near the Shell petrol station in Seksyen 17 feeding two cats. The rider was at work when he noticed the kind-hearted man and the kittens.

“Do you always feed these cats in this area?” the rider asked, to which the man answered “Yes,” and added, “There used to be more cats, but now, there are only these two left.” The stray cats looked healthy and chubby. Given a container of food, one of them started enjoying the meal, while the other approached the poor man asking for some cuddles from him. Thanks to its popularity, the video has been re-uploaded on Facebook, Youtube, and Tiktok. On Facebook, it has amassed 19k likes and nearly 2k shares. Hundreds of Netizens have been inspired by the man’s selflessness and love for stray animals. A Facebook user commented “This is the best! May Allah protect his creations from all dangers and give them sustenance.”

Another person wrote: “You are so good-hearted, o’ mankind,” to which another added “I always see him. The first thing he does, he feeds the cats before he eats. It’s near the Shell (petrol station) in Seksyen 17, Petaling Jaya,”

“(He’s) full of teaching and conviction. It turns out that he is nobler than some of us! This is shameful,” said a Netizen.

Share thí beautiful story with your family and friends.

Meet Kazou, The Eyeless Cat Who Sees With His Heart

Turning Down Dog Adoption Applicant Due To Her Weight, Man Creates A Divide In Reddit’s Opinion