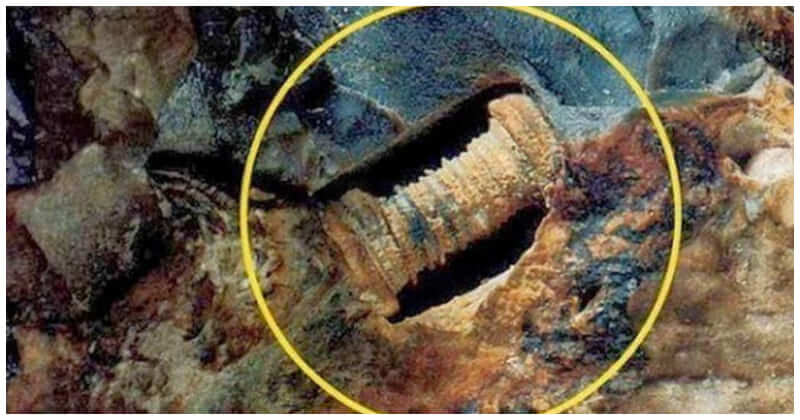 A team of researchers from Russia, named Kosmopoisk Group, which scrutinizes UFOs and strange activities, recently claimed to have found a one-inch screw embedded inside a rock dating back 300 million-year-old screw.

The Russian team said that the screw is part of the remains of advanced technologies from an ancient civilization that can confirm aliens have visited Earth millions of years ago. However, other scientists disagreed with this hypothesis, saying that the so-called ‘screw’ is nothing more than a fossilized sea creature called a Crinoid. The researchers were conducting investigation of a meteorite in the Kaluga region of Russia in the 1990s, when they spotted the unusual object.

A paleontological analysis was quickly performed, revealing the age of the stone, between 300 and 320 million years ago. They also claimed that an X-ray of the rock demonstrated another screw present inside. However, the team haven’t permitted international archaeologists to examine the object, and they haven’t revealed the material of which the screw was made as well.

Ever since from the initial discovery, much controversy has been aroused, as archaeologists deliberately reject the theory that the object represented an ancient screw, proposing a much less exciting clarification. Researchers who have examined the photographs provided an earthlier response – it was just a fossil of an ancient sea creature named crinoid, who belongs to a species of marine animals having evolved more than 350 million years ago.

The species are characterized by a mouth on the top surface surrounded by feeding arms. Currently there are around 600 species of this kind, but in the past they were much more abundant and diverse. Geologists have discovered innumerable fossils that resemble whole crinoids or their segments, some of which do look like screws, from time to time. They have proposed that the screw-like shape seen in the samples of the fossils may be the reversed-shape of the creature, which dissolved while the rock was formed around it.

Some experts believed that the sample screw was the fossil of ‘sea lily’ – a type of crinoid, however others disagreed, saying the stalks of crinoids were much smaller than the screw, with slightly different markings, discarding the hypothesis.

If you are wondering if you have seen the similar image elsewhere, then you’re right. The crinoid was the inspiration for the alien in the 1979 movie with the same name.

Nigel Watson, author of the UFO Investigations Manual said: “Lots of out-of-place artefacts have been reported, such as nails or even tools embedded in ancient stone. Some of these reports are…misinterpretations of natural formations.” “It would be great to think we could find such ancient evidence of a spaceship visiting us so long ago, but we have to consider whether extra-terrestrial spacecraft builders would use screws in the construction of their craft,” he added. “It also seems that this story is probably a hoax that is being spread by the internet, and reflects our desire to believe that extra-terrestrials have visited us in the past and are still visiting us today in what we now call UFOs.”

Currently, the debate surrounding the object remains heated, and unless the Kosmopoisk Group releases detailed information regarding the material of the ‘screw’, it is unlikely that any consensus will be reached any time soon.

Let’s hope that it won’t be any kind of aliens that implant their embryos inside us.