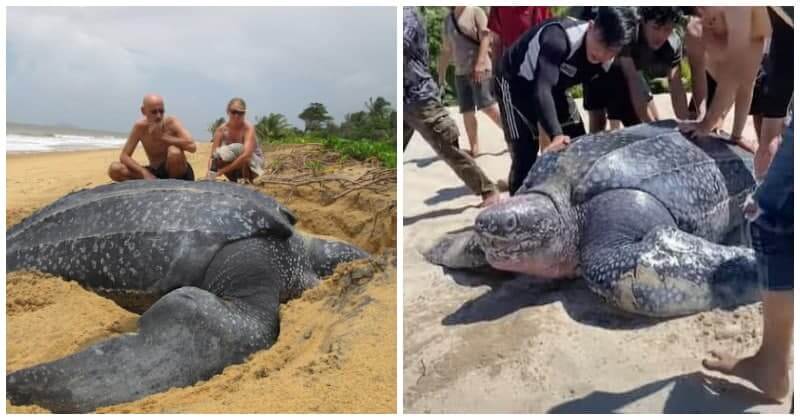 The leatherback turtle is the largest of all living turtles. Unlike the other turtles with hard shells, their backs are covered by thick leathery skin. Because of the specific design, they can be diving deep into the sea with depths up to 1,280 m (4,200 ft). The largest known leatherback was 3 meters long and weighed 916 kg on the West coast of Wales. Leatherback turtle usually travels alone, and their favourite food is jellyfish. Only in the breeding, they would meet their partner and then find a favourable place onto the beach to lay their eggs. Due to their giant size, their appearance receives a lot of attention and interest from the public. Recently, In June of 2021, a large leatherback turtle was rescued by locals in North Sulawesi, Indonesia. According to local residents, this leatherback turtle had been stuck for two nights in a swamp that was 150m away from Oping Beach. In early 2020, beachgoers were witnessed a giant turtle that was going back to the sea after laying its eggs under the sand in Phuket, southern Thailand. Top Most Unique Lions In The World, Do You Know Them?

Covered In Astonishing Blue Shades, The Crowned Pigeons Are The Largest Pigeons That Ever Spotted In The Wild

Couple Invites Their Chubby Cat To Join Their Wedding Photos, And The Results Are Adorable