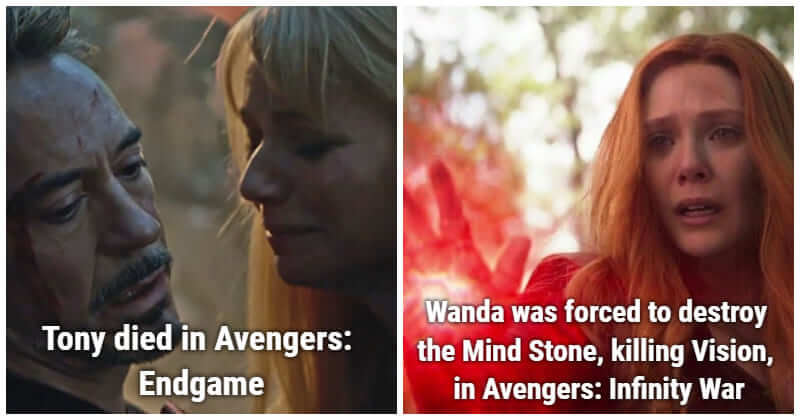 Marvel Cinematic Universe is so popular that its superheroes’ names become household names. It could be said that everyone must hear of MCU heroes such as Iron-Man, Captain America, Spider-Man several times in life. And many people become hardcore fans of these iconic characters.

Although Marvel is famous for its superhero movies (which are certainly unreal, and it seems like only children would believe it), the studio’s fans are mostly adults. In addition to the fascinating details and eye-catching cinematic effects, Marvel fans absolutely can’t stop thinking about the movie even after a really long time of its release. It is due to the deep and touching moments that MCU heroes bring to fans. These moments of superheroes make them closer to us as normal humans, which makes it easier for us to sympathize with them.

Here we have prepared for you 25 such moments in MCU. We are sorry for reminding you of these heartbreaking things! Hope that you will not cry over it! #2 Steve keeps his promise with Peggy, but it’s too late

#4 Cap dropped his shield after Tony told him he didn’t deserve it in Captain America: Civil War.

Source: We heart it

#8 Black Widow sacrificed herself for the Soul Stone in Avengers: Endgame #12 T’Challa said, “We can still heal you” to Killmonger in Black Panther #14 When Bucky’s memory was about to wiped again after he fought Steve in Captain America: The Winter Soldier

#15 Steve went back in time to return the Infinity Stones and said goodbye to Bucky in Avengers: Endgame #16 Peter broke down in Spider-Man: Far From Home, and told Happy he didn’t think he could ever live up to Tony. #18 Peter was faced with fulfilling his promise of killing Gamora in Avengers: Infinity War. #20 Yondu sacrificed himself for Peter in Guardians of the Galaxy Vol. 2 #21 the opening credits of Captain Marvel, which paid tribute to the late Stan Lee

#23 Scott came back to find his daughter all grown up in Avengers: Endgame. #24 Gamora realized she was about to die in Avengers: Infinity War