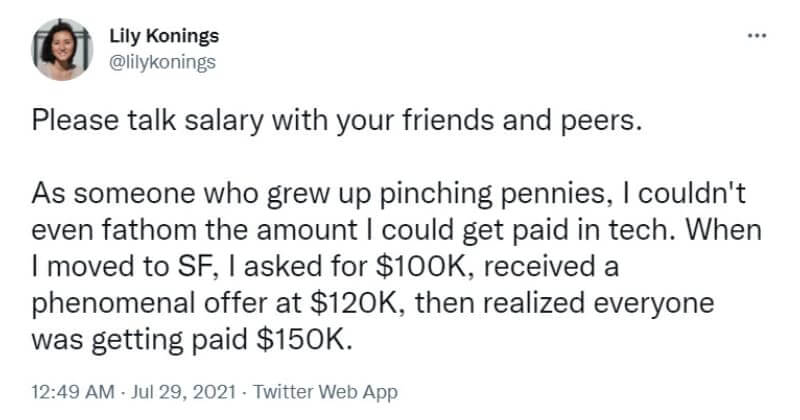 As job seekers, when looking for a job position, we always have to engage in a nerve-wracking match with the employer. That’s called salary negotiation. And regardless of the result, the final number is the secret between you and the employer only. Companies and businesses usually don’t allow their employees to talk openly about salaries. Similarly, you probably realize that we were raised with the idea that to discuss it in any regard is rude, and we should avoid it at all cost.

Well, is that actually a good thing to keep? If you think about it, no one but the employers can benefit from this. As in the case of Lily Konings, she moved to SF and got a tech job. She asked for $100K, received a surprising offer at $120K, but then realized everyone was getting paid $150K. So she suggested that people should always talk about salaries with peers and friends. It’s not just to ensure equality in pay and benefits. Her tweet went viral quickly and sparked a huge debate about whether or not it’s cool to talk about salary with co-workers. Scroll down to see what people think about this. 14 Top-Notch Funny Students Successfully Get On Their Teachers’ Nerves

23 Weird Facebook Marketplace And Craigslist Ads That Caught Our Eye

People Are Sharing The Worst Things Happened To Them This Week

20 People Experiencing the Suckage of Life

People Tell About The Wildest Things They Did As Kids, And It’s Incredible That They’re Still Here Now

25 People Revealed The Most Brutal Ways Someone Rejected Them

Raising Children Is Definitely Raising “A Little Daredevil” If You See These Hilarious Photos!

24 Y.O Daughter Begs To Move Back Home And Takes Her Brother’s Handicap-Accessible Room

If You’re Having A Bad Day Remember, There’s Always Someone Who Has It Worse