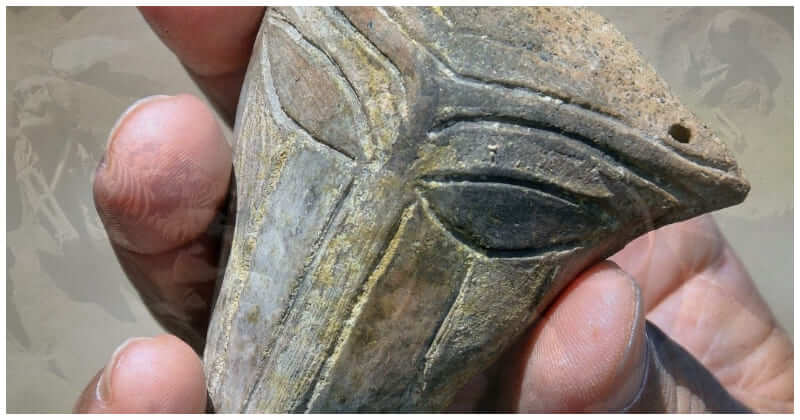 An unusual prehistoric mask was discovered during Bulgarian archaeologists’ excavations at the remains of the historical settlement of Salt Yama. According to Archaeology in Bulgaria, the mask was dated back to the 5th millennium BC.

The artifact captures remarkable characteristics of both human and animal features. Modern researchers have attributed its features to the common image depicted by aliens in science fiction. The clay mask was found near the town of Provadia by a team of archaeologists led by Professor Vasil Nikolov, who compared the artifact to an “alien in a spacesuit.”

The researchers have only begun their work later in the summer following the outbreak of Covid-19, but have yielded positive results. So, on the face of the mask, large almond-shaped eyes and a long, straight nose are depicted, but there is no mouth. The product has a triangular shape, in the upper corners there are protrusions resembling “ears”.

The conclusion was that this is actually not a face mask, but rather a figure or amulet that was worn on the chest and is associated with the cult of the sun. It was an indicator of the high status of its owner, in the social hierarchy, and also dates back to the late Neolithic, which was around 4000 BC.

Researchers indicated that some of the facial features were carved by monks, and others were carefully polished. Another notable point is that the archaeological site wasn’t very far from Provadia-Solnitsata, the oldest city in Europe, according to researchers. The city was founded in 4700-4200 BC, serving as a salt mining and trading center for local residents, and was also home to the world’s first gold jewelry.

Earlier, another team of archaeologists discovered a mask made of pure silver in the tomb of ancient Egyptian priests, dating back to the era of the XXVI dynasty of the pharaohs (685-525 BC).