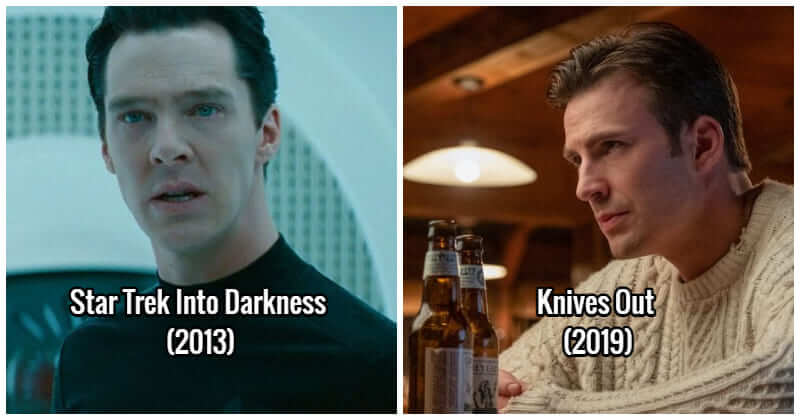 Casting is one of the factors that contribute to the MCU’s immense success. The performers chosen to represent these superheroes face the challenging task of bringing revered symbols to life, yet almost all of them have risen to the occasion. However, as brilliant as these performers are at playing protagonists, they can also play villains.

It’s easy to generalize the MCU actors in their iconic hero roles, yet the majority of them have extremely successful lives outside of the MCU. It’s also a thrill to watch some of your favorite Avengers cast as baddies in other movies. Bad Times at the El Royale didn’t get a lot of attention while it was in cinemas, but the slick ensemble thriller is certainly worth seeing. It portrays a bunch of strangers who spend the night together at a remote hotel, each with their own stories.
Chris Hemsworth steals the spotlight when he finally appears, even though he does not arrive until late in the film. He portrays Billy Ray, the charming yet violent leader of a cult that attacks the hotel and its occupants. Knives Out, Rian Johnson’s tremendously fascinating murder story, chronicles an investigation centered on a wealthy and privileged family. And Ransom Drysdale (Chris Evans) is the worst of the worst in a family full of them.
He is presented as a self-centered and unpleasant jackass initially, but he is ultimately worse than he appears. He is exposed to be the genuine murderer and even attempts to kill the helpless Marta when he is discovered. It’s a lot of fun to see Captain America embrace such a trashy persona. Because of his performance as Tony Stark, AKA Iron Man, Robert Downey Jr. became an icon and one of Hollywood’s greatest actors. However, he had an intriguing career before that post, with many ups and downs.
One of his lesser-known roles was in U.S. Marshals, a pseudo-sequel to The Fugitive. Tommy Lee Jones reprises his role as the fugitive-hunting cop, this time with Wesley Snipes as the suspect who swears to be innocent. Downey Jr. plays a federal agent caught up in the hunt who turns out to be the real perpetrator all along. It’s not a great film, but it’s entertaining to witness Downey Jr. as an unusual evil. Scarlett Johansson makes her Marvel Cinematic Universe entrance as Natasha Romanoff in Iron Man 2. She would reunite with director Jon Favreau many years later for the live-action Disney adaptation of the epic The Jungle Book.
The plot revolves around a small boy named Mowgli who inhabits the forest with the animals, some of which are friends and others who are hunters. The snake, Kaa, falls into the latter kind. Johansson provides her iconic voice to the character of the cunning and huge snake who likes to eat Mowgli. S.W.A.T. was introduced to the big screen in 2003, long before it had a television remake, in the action film starring Samuel L. Jackson and Colin Farrell. They portray members of S.W.A.T. trying to convey an international fugitive as a city full of corruption attempts to intercept them.
Gamble (Jeremy Renner), a former S.W.A.T. member, poses the most serious threat to them. Renner appeared to be practicing his marksmanship in this part in preparation for his upcoming turn as Hawkeye. With the upcoming Armor Wars, Don Cheadle will get the opportunity to play War Machine in a major role. Cheadle, on the other hand, has already established a lengthy and distinguished career, with one of his early outstanding performances in the great crime film Out of Sight.
Snoopy Miller, played by Cheadle, is a former boxer who becomes a small-time criminal who believes he is big-time. Cheadle does an excellent job of imbuing Snoopy with a cold-blooded danger as well as a funny aloofness that distinguishes him as a distinct and fascinating villain. Some people may be unaware that Captain Marvel was not Brie Larson’s first film based on a comic book. She also starred in Edgar Wright’s hilarious Scott Pilgrim vs. the World adaption. The film follows the titular hero as he challenges his new girlfriend’s nasty ex-boyfriends before they can date.
While fending off the other nasty exes, Scott must also deal with his own ex, Envy Adams (Larson). Since their separation, Envy has become a popular rock star and now feels entitled to everyone. She also demonstrates her heartlessness by having her lover beat an ordinary fan who was bothering Envy. With his portrayal as Doctor Strange in the MCU, Benedict Cumberbatch has succeeded at playing egotistical protagonists who viewers can’t help but care for. He did, however, manage to be quite terrifying when playing possibly the most iconic Star Trek antagonist of all time.
Star Trek Into Darkness continues the remade Star Trek world and rehashed a classic plot, with Cumberbatch portraying the ruthless Khan, a super-soldier bent on vengeance against the Federation. While the film as a whole was a bummer, Cumberbatch was the centerpiece. Given Chris Pratt’s status as an action hero, it’s amusing to reflect on his days as a supporting actor in sitcoms. Take Me Home Tonight, a comedy set in the 1980s, also stars Anna Faris and Topher Grace.
Pratt seemed to be having a lot of fun portraying the archetypal loud bully role who is also Faris’s character’s unloving lover. Pratt is shockingly effective at being a douche, and he has no qualms about being completely unlikeable. Jackie Brown is one of Quentin Tarantino’s greatest films, despite not being as well-known as some of his other works. Tarantino also reunites with Samuel L. Jackson in this film. While Jackson frequently plays ethically problematic figures in these projects, Ordell Robbie is a full-fledged villain.
Ordell is the polar antithesis of Jackson’s portrayal of the domineering and calculating Nick Fury. He’s a cocky weapons salesman whose hubris leads to foolishness. That doesn’t make him any less deadly, though.