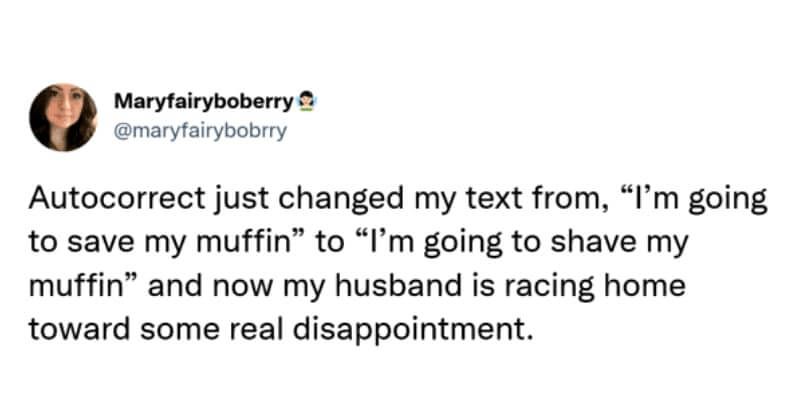 Autocorrect function has been around for ages. And fairly to say, people have got more troubles with it rather than benefits. Ever since it was introduced to IOS in 2007, autocorrect has been the true culprit behind countless mother ducking incorrect text messages. Instead of suggesting the right option for your words, this function usually alters your text in an inexplicably weird sense. And as a result, people have a lot of cry-laughing situations, sending messages with the wrong meaning.

Even though we’ve already had a fair share of autocorrect mishaps, these things never stop being funny. And here, we have collected some tweets where people humiliate this amazing function and what it has done to them. Well, something that runs by codes cannot be as good as a human’s brain, right? We know this gets so silly sometimes, but what can we do? At least, it brings some fun to us on gloomy days. That’s good enough. Now, let’s scroll down and enjoy the time with us!

#1 Why don’t you let me enjoy my food

#3 Blame the autocorrect for it

#4 Rare case when autocorrect does correct a message

#8 It’s secretly laughing behind our backs

#9 You can’t hide from autocorrect

#12 If something can go wrong, it will go wrong #14 Now that we know your secret #19 Now that everyone will never look at you the same, ever

#20 Now that I believe autocorrect has intelligence

28 Humorous Tweets From People Who Are Obsessed With Halloween

Entitled Couple Wants Neighbors To Cook And Do Housework For Them Because They Are Expecting A Baby, Gets Slammed On Twitter

Dad Takes His Kid On Dangerous Photoshop Adventures, And The Results Are Hilarious

Look Back At 35 Best, Funniest Parenting Tweets Throughout 2021

17 Of The Most Ridiculous Food Packaging That People Came Across