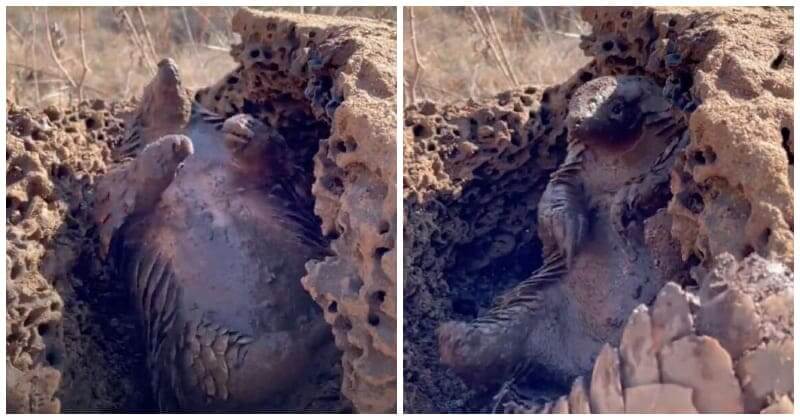 Just like babies, animals are pure and cute. They don’t know how to hide their emotions, and sometimes, this makes the purest moment we’ve ever seen on Earth. This little Pangolin has recently gone viral after a video of him enjoying a  mud bath was shared on the Internet. Caretakers have just found that he does love the mud bath.

Stevie the little Pangolin was rescued from the poachers in the South American city of Pretoria when he was just a newborn. When he was found, the animal was underweight and sick. His mother was taken by the poachers and couldn’t nurse him anymore. He was later moved to Johannesburg Wildlife Veterinary Hospital (JWVH) and started being nursed by the staff there. During the three first weeks at the hospital, the baby pangolin could eat only a special milk formula, but he soon moved on to ants and termites in the following weeks. As his health improved, Stevie put on weight and became more and more confident.

“Since arriving at the hospital, he has gained over 4 kilograms (over 8 pounds),” Kempen, spokesperson at JWVH, said. “He is a much more confident pangolin, and he is able to forage for termites on his own. When he first arrived, he relied on a special milk formula exclusively as food. Over the weeks that followed, and as his health improved, he went out foraging for ants and termites.” The hospital added that the animal always loved to play with whatever interesting thing he found on his daily walks. Another favorite activity that he never forgot was to forage for a termite snack. Such an active guy!

“He thoroughly enjoys playing with rocks, tree branches, and even tree stumps. He will roll around these elements and has even been known to roll down small embankments and termite mounds,” Kempen shared.

When Stevie was a little older, the hospital staff train him to express pangolin behavior. Separated from his mom at an early age, the pangolin had to learn mostly everything he needed to survive in the wild. But one thing he didn’t need help learning was to take a mud bath.

“As soon as he finds a puddle of water, he usually rolls in it,” Kempen told. “This seems to cool him down substantially, which enables him to feed for longer and be more comfortable as he doesn’t get so hot.” “Pangolin is known for mud/fresh dung baths. We believe this is to not only cool them down but to also potentially offer protection against parasites,” she added.

Pangolins are known as delicacy animals for the medicinal value of their scales and their nutritious meat. Therefore, they are often the object of hunters and poachers that grab them for illegal purposes.  We hope that Setive will stay strong and safe, even after he is taken back to his natural home.

Woman Gets Called A Jerk For Choosing Client Over Parents’ Dog, But Reddit Rallies Behind Her

Rescue Cat Was So Excited His Mom Made Him Playhouse

Reddit Talks Over Passing A New Law For Pet Owners: Is It Finable To Unleash Pets While Driving?