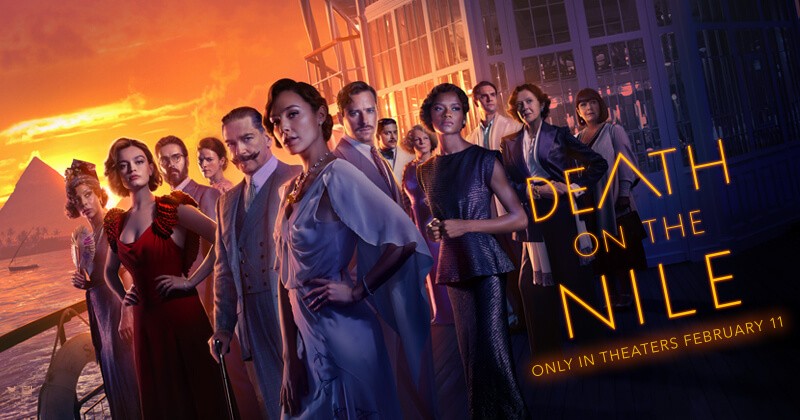 On February 11, Death on the Nile, a new film by Kenneth Branagh based on the same-name novel by the mystery queen Agatha Christie, arrives at the cinema. The movie was supposed to be released in 2020 but due to the pandemic, it has been postponed several times and eventually appears in 2022 with a worldwide release only in cinemas. And in this post, we’ll try to review this film as much as possible without any spoilers.

After Murder on the Orient Express (2017), Kenneth Branagh finally returns as both the director and the protagonist of another adaptation of a novel by the queen of English crime fiction Agatha Christie. If you already had a preview of Hercule Poirot’s next adventure in the finale of the first film, you might have guessed what would happen in this new work. In 2018 the production of Death on the Nile was confirmed and subsequently, due to the pandemic, the film has undergone several slips. However, the novel that Branagh adapts has collected positive opinions for years and was even defined by writer John Dickson Carr as one of “the best mysteries of all time” in 1946. It had already been adapted for cinema in 1978 by John Guillermin with a star-studded cast including Bette Davies, Mia Farrow, Angel Lansbury and Maggie Smith.

In a sense, Branagh performs a similar operation by including in the cast a lineup of names particularly known to the public including Armie Hammer, Gal Gadot, Emma Mackey, Russell brand, Annette Bening, Rose Leslie and Letitia Wright. The same thing also happened with Murder on the Orient Express as the cast featured Johnny Depp, Penelope Cruz, Willem Defoe and many more. On the whole, Death on the Nile is a good adaptation of Christie’s work, respectful in staging and without particular distortions in terms of the narrative. Branagh had already demonstrated familiarity with the works of the English writer with his previous film. Murder on the Orient Express is also full of easter eggs from other novels, and it’s a feature that he brilliantly replicates in this new project.

Although it’s hard to get the twists (at least for those who haven’t seen the 1978 movie nor read the novel), the film manages to entertain and present the set of particularly varied characters quite well. Unfortunately, despite the cast of a prominent class, some characters are overshadowed or forgotten during the course of the film. Branagh himself in the role of director and leading actor succeeds in the complete management of the work, even if he abuses omnipresence (a characteristic absent in the novels of Agatha Christie in which Poirot is the protagonist) but leaves a huge margin of action to the characters who dot the events by intervening only in certain and precise moments.

The management of the stage space is interesting. Branagh, after a long and excellent theatrical career as one of the main interpreters of Shakespearean plays, pours all his love for the theater into his films, creating real scenic stages that make the actors move. The film’s location par excellence is the Karnak boat (entirely reconstructed) where the murders and the resolution of the case take place. It’s a boat made of crystal glass, bridges and terraces in which it seems impossible to hide. Even the scenography doesn’t fail to recall the backdrops of theaters either.

The soundtrack by Patrick Doyle (Branagh’s longtime composer who created the outstanding soundtracks for Thor, Murder on the Orient Express, Cinderella and Artemis Fowl), is also suggestive and very successful.

In short, Death on the Nile is a good adaptation of Agatha Christie’s work, respectful in the staging and without particular distortions in terms of the narrative. However, despite presenting an important cast, the characters are only partially exploited and deepened. Kenneth Branagh’s love of theater is palpable in every frame, so much so that the entire staging is transformed into a stage in which the actors move and interact.

In the future, we just have to wait and find out if there will be other adventures of the legendary mustachioed Hercule Poirot played by Kenneth Branagh.