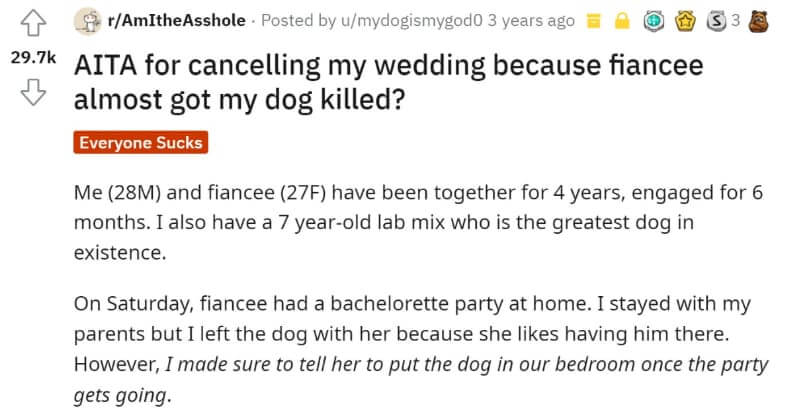 A dog is a living, breathing creature, and most people would do anything to protect it. Human carelessness has been has almost ended dog life

Taking responsibility for a dog is harder than it seems to be. It’s just like you becoming a parent of your pets. A dog is a living, breathing creature, and most people would do anything in their power to protect it.

Taking care of other people’s dogs requires even more. You may need to pay 200% of your attention to ensure the dogs’ safety. Because it is a big task, owners often find someone they trust to foster their pets while they are missing for a while.

Recently, a groom has shared on r/AITA asking if he is wrong to cancel his wedding after his fiancee almost killed his dog due to her carelessness. The post has amassed over 29.7k upvotes, and thousands of netizens have just joined the discussion.

To cut a long story short, the fiancee held a bachelorette party and wanted her groom’s dog to be with her. So, before leaving the dog with his fiancee, OP (original poster) gave clear instructions on how to care for the dog. But she forgot that at the end, and her carelessness led to negative consequences – the dog was overeaten with chocolate and alcohol, and it mostly lost its life. Read the full story here: Most Redditors are talking the side of OP as they think his fiancee didn’t seem to bear in mind her groom and his dog. She was also an irresponsible person for intentionally letting the dog stay in the party while knowing that it could be dangerous. Redditors didn’t think that it was a good relationship. So, a good enough reason to end it.

Some people even thought of a worse scenario that if she would have done the same thing with a kid around.

The way she ignored OP’s instructions showed that she didn’t respect him and his dog at all.

However, some people think that OP shouldn’t have spoken such atrocious words to her, despite how bad she had caused to him and the dog.

One even believed that OP already looked for a reason to call off his wedding. Another added he was overreacted to the issue.