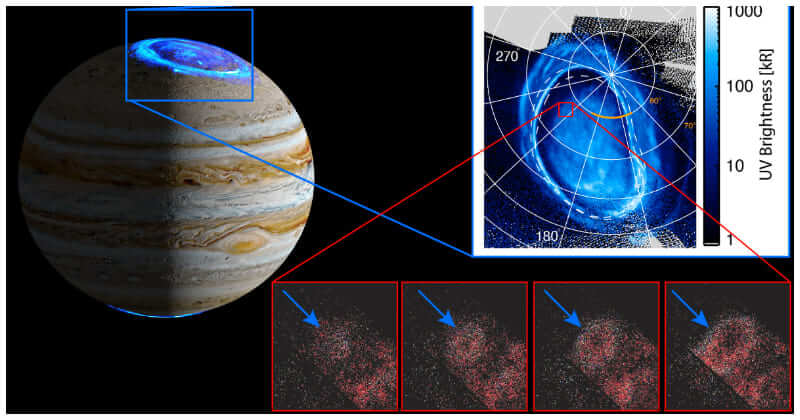 After more than 40 years, scientists have found the answer to the mysterious auroras on Jupiter. Aurora borealis, or northern lights, are the largest natural light show on Earth with breathtaking beauty. However, this phenomenon also occurs on other planets in our Solar System, including the largest planet – Jupiter.

Jupiter’s auroras were first detected more than 40 years ago. Astronomers have long sought the answers to their mechanism, and NASA has even called them a “powerful mystery”.

“They are unimaginably more powerful (than Earth’s) and much more complex. Jupiter’s northern lights have these bright flares, and these flares can be up to terawatts of power that would power all of civilization,” said William Dunn, a senior research fellow at the Mullard Space Science Laboratory at University College London. He was also part of the research team who have solved the 40-year mystery of the aurora on Jupiter.

By combining observations and data from NASA’s Juno spacecraft launched in 2016 with the European Space Agency’s X-ray telescope, researchers have discovered that Jupiter’s auroras were caused by fluctuations in the magnetic field on this planet.

” Probably the reason it remained a mystery for 40 years is because we hadn’t had this opportunity. We’ve not had this beautiful and amazing spacecraft in Juno and also an X-ray telescope orbiting the Earth,” said Dunn. The study was published in the journal Science Advances on July 9, 2021.

On Earth, the auroras are mainly produced by solar wind as charged particles from solar storms travel through space and into Earth’s magnetosphere, creating colorful light shows.

On Jupiter, however, astronomer Dunn said, there were other factors contributing to this phenomenon. Jupiter rotates much faster than Earth, and has the strongest magnetic field of any planet in the Solar System. Furthermore, Jupiter’s third-largest Moon, Io, is surrounded by more than 400 active volcanoes, spewing plumes of material into Jupiter’s magnetosphere – the region of space surrounding a planet, controlled by its magnetic field. “The northern lights are basically the video of what’s going on in the magnetosphere,” Dunn said.

Jupiter’s X-ray flares were first detected in 1979, baffling scientists because they have often associated with more exotic objects in the universe such as black holes or neutron stars.

With simultaneous observations from Jupiter and the MM-Newton X-ray telescope, Dunn and his colleagues were able to find a link between the emission of X-rays and Jupiter’s auroras.

Dunn said the next step the team would take was to see if this process only occurs on Jupiter or it would happen on other planets, including those outside our Solar System.

Judge In Darrell Brooks Case: Who Is Jennifer Dorow?