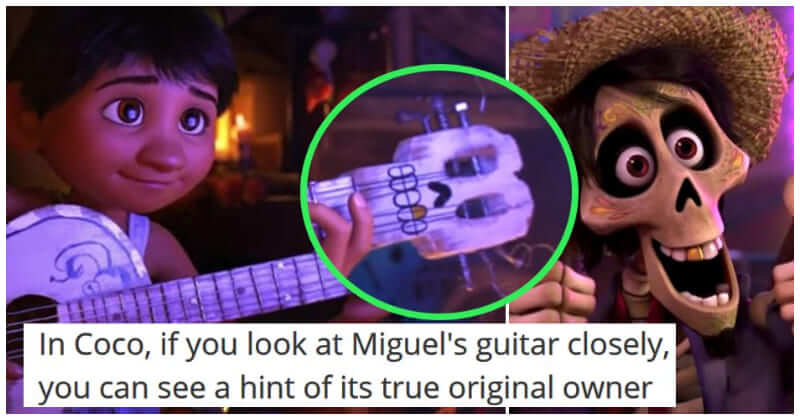 For decades, Disney has produced some of the most successful films in the world. Whether you’re a kid or an adult, you certainly have a favorite Disney film. Disney classics like The Lion King, Beauty and the Beast, and The Little Mermaid have been seen more times than we can remember. Even as we grew older, our fondness for all things Disney remained.

And, we’re sure to know all the scenes and the progression of the story of our favorite films. However, no matter how many times we have watched these films, we couldn’t notice all the hidden meanings in some sequences.

Scroll down to check out this collection of hidden details and Easter eggs from our favorite Disney movies and find out what we have missed! If you like this post, don’t forget to share it with your friends. Here we go! #2 In “Coco”, the Land of the Dead has several skulls outlined by the cityscape #3 Nemo is in a box from a board game called “Find me” in the background of “Inside Out”. #4 In “Coco”, these two fellas seem like they’re making a deal of some sort #5 In “Cars”, on Lightning McQueen’s tires, there is a word “Lightyear” #6 In “Coco”, you can see Woody, Buzz Lightyear, Mike Wazowski

#7 There are loads of Disney dog cameos in “Oliver and Company”, during the big “Why Should I Worry?”: Pongo from “101 Dalmatians”; Peg, Trusty and Jock from “Lady and the Tramp” #9 When Maui is stuck in the half-shark form in “Moana”, his tattoos are also stuck in shark form #10 In “Lilo and Stitch” when Nani is signing the adoption papers at the end of the movie, it’s actually a note thanking the cast and crew #11 In 2013, tensions in Norway flared over whether to stack wood bark-side or wood-side up. This is why you see two men arguing about it in “Frozen” #12 In “Coco”, if you look at Miguel’s guitar closely, you will see a hint of its true original owner

#13 In the first Cars movie, the mountain range was actually inspired by the real-life Cadillac Ranch #14 In “Cars 2”, there’s a little tapestry hanging up that’s basically the automobile version of the one seen in Brave #15 The pink color changes according to Ellie: (in the wedding) bright pink- faded pink (in the hospital) – no pink (when she died)