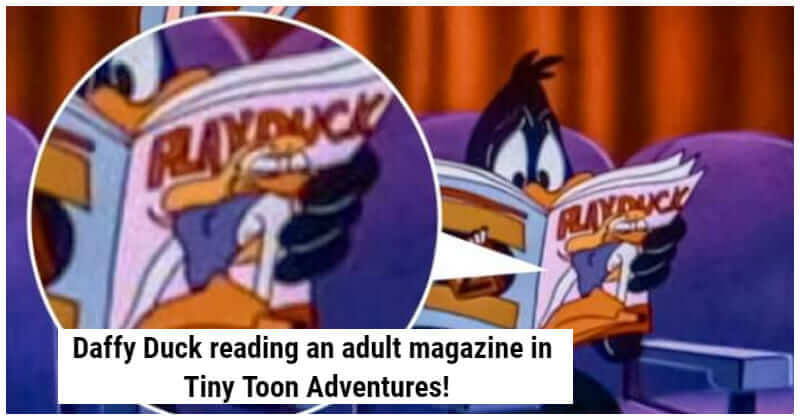 When it comes to children’s movies, we can’t help mentioning Disney, the largest and most popular franchise in the world. They have produced many movies that earn billions of dollars globally each year. And Disney has successfully become an inevitable part of every childhood. That’s why Disney has had a tremendous impact on many generations, especially today’s youth.

However, not only children but many adults are also loyal fans of this studio, because Disney products always bring positive messages and energy. Perhaps this is the reason why in Disney movies, there are scenes that only adults are able to understand. You might probably miss several hidden meanings in Disney’s scenes when you were a child.

So we have prepared a list of such scenes in Disney movies. Surely, you can comprehend these scenes fully now and realize the reason why we have lost them during our childhood. Keep scrolling down and find out what they are! Mia and Tia drive up to Lightning McQueen during a post-race picture shoot with the winners. They claim to be huge fans of the racer and then begin to demonstrate the racer their “high beams” on their wheels. “I prefer you in leather anyway” – Anna said to Kristoff and gave him a soft kiss and rubbed his hair. Then we could see that he was trying to hide his embarrassment but he couldn’t hide us that he was grinning foolishly. This smile is so meaningful, but absolutely only adults can get it.

#3 Hercules tells Meg about the play they watched together “And then that, that play, that, that, that Oedipus thing. Man, I thought I had problems.” – Hercules illustrates the play. Those who know Greek mythology might easily see the humor in Meg’s reaction to this joke. The story about King Oedipus is a miserable story. Oedipus had to deal with a lot of hard things when he killed his father and married his mother, without realizing that these people were his parents. But Hercules says that compared to what he had to deal with, his problems are just ridiculous! “I was just in the pool. The water is cold. Don’t judge me!” – the unseen man explained

When Vanellope gets to a room with Disney princesses, princesses show their defensive posture. Cinderella is the one who gets angry. She breaks her shoe like men break bottles in bars when they fight. For a kid movie, this scene might get controversial comments. In this scene, SpongeBob was watching actinic dancing to sensual music. The show on the screen, based on Bob’s expression, is not suitable for children. While Jane is drawing Tarzan, she expresses her feeling for Tarzan: “And his eyes were intense and focused and…I’ve never seen such eyes.” And her father immediately knows that she has fallen in love with him. He said: “Should I leave you and the blackboard alone for a moment?”

#9 Look at the magazine that Daffy Duck was reading Kids might not focus on this detail, but adults will definitely get what he was reading – an adult magazine! “What do you say I get someone else to watch the sheep tonight?” – said Bo Peep In the first part of the movie, Woody, Andy’s favorite toy, advise his friends not to worry about Andy’s birthday and his new gifts. But not all the toys share Woody’s calm demeanor. Mr. Potato Head openly demonstrates what he thinks about Woody’s opinion. When Slinky sticks up for Woody, Mr. Potato Head removes his lips and moves it behind himself, visually calling Slinky a “ butt kisser .”

#12 Zootopia – Judy and Nike go to the nudist club! Do you remember Judy and Nike’s visit to the nudist club? While the rabbit doesn’t know how to face it, the sly fox seems to really enjoy watching it.