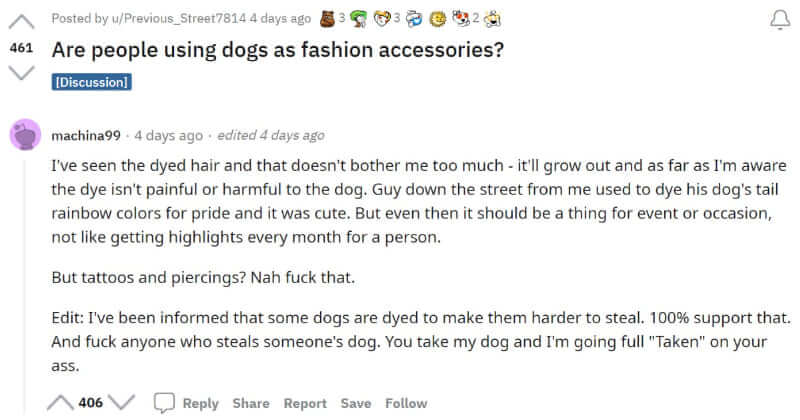 In the 2000s, there was a famous trend in which pets were used as fashion accessories for their owners. Pioneered by celebrities, this trend soon became popular, and there was a time handbag-style dogs became a common sight on streets. Recently, the trend has been making a comeback as owners started pampering small dogs, carrying them in bags, or making them flashier with ear piercings, dyed fur, and tattoos.

No matter how popular it is, many people have voiced their concern over the trend because it is animal abuse that harms animals. As a person disapproving of this fashionable trend, Reddit user Previous_Street7814 has recently posted on r/dogs, asking whether it is acceptable to use your dogs as accessories. In the post, he complained that the trend is “distressing” and “illegal”. He also wanted it to stop because animals are meant to live freely in the wild and be our companions at home — not our “plus one” to award shows, shopping trips, and Sunday brunches.

So, is it OK to turn your dogs into accessories? Well, we believe it is not. In an article published in 2011, Daily Mail UK reported on ‘fashion accessory’ dogs being dumped in record numbers at animal shelters. They suggested that being carried in bags can result in improper behaviors in dogs. They’ll refuse to walk and prefer being carried everywhere in bags. In some cases, some dogs get used to being the center of attention and growl if they see others getting any human’s notice.

More depressingly, ‘fashionable’ pooches are found abandoned in shelters after their owners realize they can no longer handle the responsibility they’re supposed to take. Unallowed to walk or express normal behaviors, these dogs also don’t get enough care because their owners pay more attention to how they look and often forget to feed them on time. Therefore, Animals in human society stated that “this is all bad welfare on the animal”. Due to its drawbacks, Blended (2019) didn’t support a comeback of this 2000’s trend because it’s harmful and unhealthy for animals.

However, the majority of netizens think that dogs having dyed fur is acceptable as it can protect them from being stolen by thieves. There is a kid of non-toxic dye that doesn’t last long and doesn’t cause pain or hurts to animals.

Some people share that they also have dogs with dyed coats, and confirm that it is safe for their animals. Others even think it makes dogs cuter and more beautiful.

Piercing and tattoos, on the other hand, are cruel to animals.  Owners shouldn’t do such things to their pets. Here is how people react to the issue.

“Mentally, She Was Not There”: Woman Lived With Strange Dog For Four Months Because Dog Groomer Returned Wrong Dog To Her