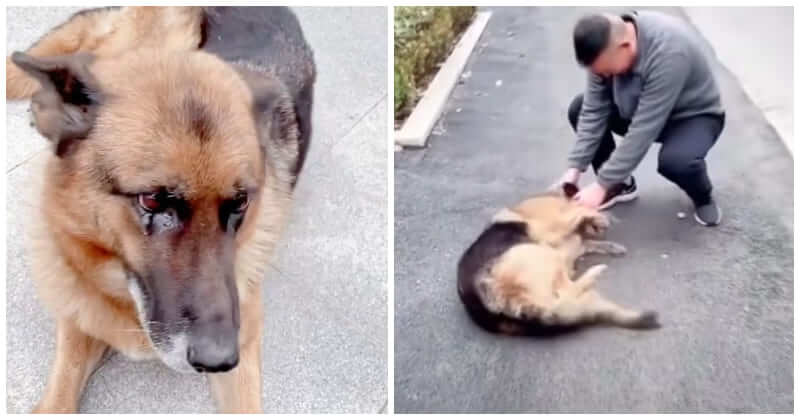 A reunion always brings us the most beautiful, precious feelings in the world. A heart-wrenching moment to behold has occured in Henan province, central China when a former police dog met her handler for the first time after years of being apart. The dog, named Wangwang, 8 years old, burst into tears and refused to let go of her handler after recognizing his voice. She appeared to cry in happiness in a touching clip posted on Douyin by local police.

Wangwang used to be a sniffer dog working in Xichuan security checkpoints and retired in June 2019, a local newspaper reported. She was soon adopted by a forever-loving home, which meant that the dog lived the rest of her life separating from her handler. Meanwhile, the police officer continued his job as a patrolman.

Last month, when he was patrolling in the neighborhood near Wangwang’s house, the officer decided to drop in and visit his furry pal. It was such a big surprise for the pooch that she couldn’t control her emotions meeting the old colleague after years apart.

The clip shared by Xichuan’s police showed the handler calling for beloved Wangwang from outside her house. Hearing the familiar sound and realizing where it was from, the dog rushed to the front door and ran into her handler’s arm. Tears started being seen on their faces. “Wangwang’s hair is turning white but she is well-fed, she is getting fat,” the post reads. “It is always hard to bid farewell to your buddy.” The dog was so happy to reunite with the police unit she loved to the moon and back. Viewers who saw the touching moment felt happy for the dog and the police officer. A user wrote: “The dog is welling up. Dogs are really loyal companions, please treat her well,” while another added, “You can tell how much Wangwang misses her handler. You can understand when the dog greets you belly up.”

We know that dogs are loyal and loving creatures, and Wangwang is an example of that. Please share the clip with your friends and family.

Music And Leo Are Soulmates, Showing Through 14 Funny Memes

The Dark Side Of Aries: They Get Mad So Easily, Showing In 15 Memes